Connecting Your Equipment – The Basic Rule of Signal Flow 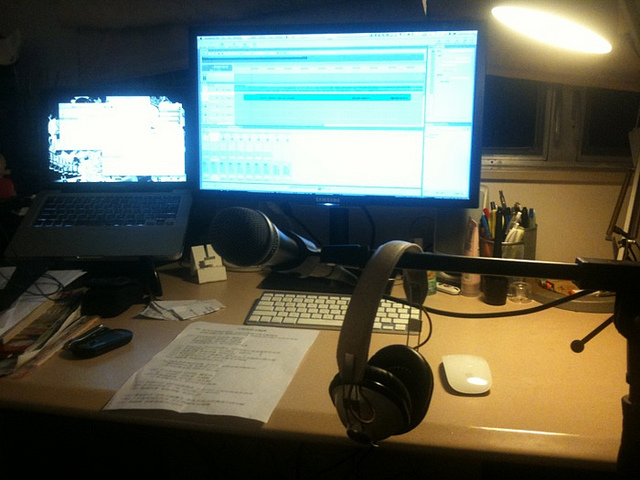 I found a question about signal flow on Yahoo answers from a guy that’s trying to hook up his system.

Since the question is pretty relevant to many of the beginners out there I thought it might be more beneficial to answer it here.

The gear that this particular guy is working with is:

Let’s see how we can connect this system together with the least amount of effort.

Signal Flow Rule #1 – What Goes In, Must Inevitably Come Out

The first rule of connecting your gear is to remember the in/out rule.This might seem obvious, but it’s often overlooked:

What goes out of an output, must connect to an input.

And vice-versa. This is the basis of all signal-flow. The signal must flow in one direction, and if you connect an input to an input you’re essentially cutting off your signal.

When you’re troubleshooting your connections, just remember this simple rule. If you’re having problems, just go over your system and make sure you’re not connecting an output to an output, or an input to an input.

Connect the Behringer Xenyx via USB to the computer. The Xenyx mixer acts as a mixer to which you connect both the Neumann and the MXL microphones. The microphones connect to the XLR inputs, and if your computer recognizes the interface then you should get a signal into your audio software.

For an in-depth look at the basics of the mixer, check out the Open Mic Guide – Making the Most of Your Mixer.

Additionally, since the Xenyx doubles as your audio interface, you should connect the headphones to the headphone output on the mixer.

The M-Audio Venom can be hooked to your computer directly via USB, much like the Xenyx mixer. However, the Korg microKorg only has line outs, which means that you’ll need to connect it to your mixer.

This is easily done with a simple TS/Jack cable(guitar cable) from the microKorg’s mono out to a free channel on the mixer. Now you’ll just treat it as another instrument that’s connected to your mixer.

That’s it! Regardless of how much gear you’ve got to work with, and given you have enough inputs and outputs available, you can easily hook up any extra microphones, instruments or synthesizers.

Depending on how serious you are about recording, there’s definitely a lot more gear that you could get. But start small, and buy more stuff as you get more comfortable with what you have.

Check out the guide to Setting up your Home Recording Studio for crash-course in equipping and installing your home studio.

Just remember the simple rule of signal flow. Keep the signal flowing in one direction, with each output connecting to a corresponding input.

[Update] Interestingly enough, the question I found has since been deleted from their database. I hope the guy got his question answered, and if you had similar problems I hope this post helped.