Warning: Why is Everybody Yelling in Here?!?

I’m dedicating this week to fighting The Loudness Wars.

What war is that? The war where everyone is competing to be the loudest kid in the room.

It’s similar to yelling at you at the same time.

Who are you going to listen to when everybody is screaming for you to hear their spiel?

In last Friday’s post I talked about a few things you can do to fight the loudness wars.

Two of the things I mentioned were leaving enough headroom for the mastering engineer, as well as mastering with enough dynamic range. These two things might be confusing. They are sometimes used interchangeably even though they do NOT mean the same thing.

Being the loudest album on the radio has nothing to do with how great it sounds. In fact, I would argue that it’s absolutely the opposite.

None of them. Absolutely none.

All of the best albums on the graph below are the ones that have the greatest “punch” and “impact.” That’s what dynamic range is.

Tell me, which album would you prefer: the terrible sounding “Death Magnetic,” squashed to a dynamic range of only 3 decibels , or “Sgt. Pepper’s,” an album that not only shaped modern music, but also happens to have a DR of 11. 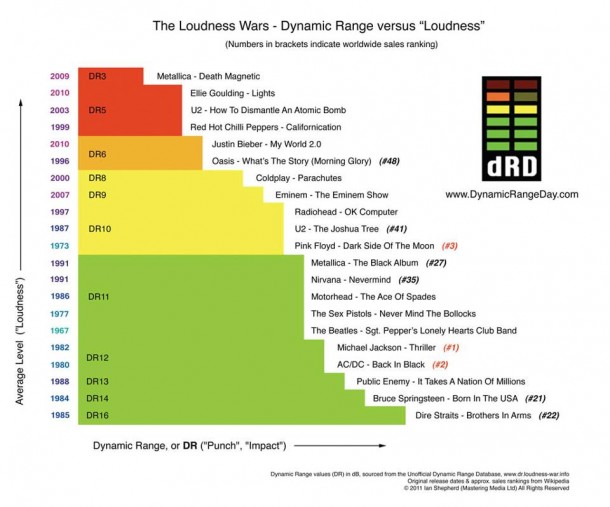 Also, just because it’s rock music doesn’t mean it has to be over-compressed and squashed. Nirvana’s “Nevermind” has a dynamic range of 11, the same as “Sgt. Peppers.” Loudness comes with the volume knob, not your compressor/limiter.

Speaking of “Death Magnetic,” check out this

Be Proud of Your Loud Mix