One of my favorite parts about researching “Rebel Yell” is that Billy Idol became inspired to use that name after seeing Mick Jagger, Keith Richards and Ron Wood of the Rolling Stones drinking the bourbon of the same name.

Talk about an interesting way to become inspired. It tells me that you can be inspired by everything. And “Rebel Yell” became one of Billy Idol’s lasting legacies, both the album as well as the title track.

So take in your surroundings and get inspired to write whenever something interesting happens to you. Sure, it might not be drinking with The Rolling Stones but lesser things have inspired great songs.

“Rebel Yell” encompasses the era it was released perfectly. It has the obligatory big gated drums, the high-velocity guitar riffs, 80’s synthesizer and a nice dollop of reverb. And at the forefront it was Billy Idol’s rough and edgy croons that were equal parts Bizarro Frank Sinatra and 80’s Johnny Rotten.

There’s nothing really different about “Rebel Yell’s” song structure. It follows a typical pop song pattern of verse/chorus/verse/chorus/bridge/solo/chorus with some slight variations and fills to tie the parts together.

However, if you fancy yourself a guitar player I would recommend checking out how to play the intro from Steve Stevens himself here: https://www.youtube.com/watch?v=IqGB4nQIAcQ

After the “Leo Kottke” intro we dive straight into the powerful guitar riff and synthesizer interplay. The intro goes on for a few measures until the guitar chords sustain into the verse, giving the listener a little breather before the verse comes in.

Stevens starts playing his electric guitar even faster with a sixteenth note riff. The synthesizer sound does drop out after the intro and Billy Idol’s slower vocal delivery has an interesting contrast with the lighting fast guitar playing. The synths play simple fills between vocal phrases.

As we get into the chorus Mr. Idol perks up a little bit and lets us in on his raunchy rock vocals he’s so famous for. But what I really like in the chorus is the interplay between the drums and the guitar. The guitar is a very carefully arranged power chord riff that’s juxtaposed really nicely against the simple and straight kick/snare arrangement of the drums. The original drum track was actually constructed with a drum machine, similar to some of Billy Idol’s older songs so it might be a remnant of the original arrangement that they wanted to keep.

The verse repeats in mostly the same manner as before, with no extra instruments adding to the arrangement. It’s just straight rock ’n’ roll from here as we get thrown into the second chorus.

Breaking up the song structure and arrangement, the bridge introduces the intro riff again with Billy’s crooning vocals, the electric guitar riff and the bell synthesizer sound.

From then on we have a shredding guitar solo that sounds like outer space with ray gun effects and all. More info on the ray gun effect later.

The story about the 32 bar breakdown section is interesting. In a MixOnline article Stevens said that because they were combining dance elements (such as synthesizers and a danceable beat) with rock music they always put an extra 32 bar part in the middle of the song. The breakdown arrangement technique reminds me of jam bands that have pretty straightforward bridges or solo sections on the record but when they play live their solos can go on forever as everybody in those bands is an accomplished soloist. If your band likes dragging out parts of your songs with instrumental and solo parts I would recommend keeping it simple and straightforward on the record while going all out during your live performances.

Unless you’re Phish. Then you can do whatever you want.

In “Rebel Yell” this breakdown section is the calmest part of the song and contrasts pretty heavily with the preceding solo section and the chorus that explodes out of it. As the section goes on, more parts are added. The initial synthesizer pad in the background becomes louder and more intricate while other atmospheric synthesizers are added to the arrangement until it finally breaks into the final chorus.

The final chorus is not a regular double chorus in its own right but rather a single chorus with an ad-libbed outro that follows the same chord pattern with Billy Idol singing variations of certain chorus lines.

And just as the songs starts it ends with the really cool “Kottke” fingerpicking pattern.

The production is an amalgamation of eighties hair metal and disco pop. It’s big and raunchy while also sounding almost a bit cheesy. The synthesizer sound in the intro can be reproduced with a DX7 bell-type patch.

The guitars are all doubled left and right as to give it that layered wall of rhythm guitar. They were miked with a Shure Sm57 and a Neumann 87 through a 50’s plexi Marshall amplifier. Stevens says he played a Kramer guitar but any type of 80’s era metal guitars (such as a Jackson for example) would do well to recreate that sound. The guitars really work even though they are doubled and played so fast, obviously due to the fact that Stevens is a really great guitar player. The guitar always sounds tight and the only times it might be perceived as cluttered is in the fast-played verses.

The Ray Gun effect after the first chorus as well as in the solo is created by using the Lexicom PCM 41 digital delay processors. By overloading the modulation and feedback you can get this sort of sound from many digital delay units. As Stevens said in a Guitarworld interview, “I figured that the closest I could get would be with a delay line with a modulation section. So on that record, that effect was done by plucking a harmonic at the 3rd fret on the G string, using a lot of compression, and timing the rate control of the modulation section of a Lexicon PCM-41 to sixteenth notes.”

Even though the vocal sounds pretty dry in comparison to the rest of the spacious production the isolated vocal track says otherwise(https://www.youtube.com/watch?v=NZ3O-qp-qIQ). They used the reverb tank at Electric Ladyland Studios for the guitars at least and might have used it for the vocals as well. The reverb doesn’t change from the verse to the chorus but Billy’s singing is more energetic so the reverb is either pulled back in the mix or his singing actually prohibits the reverb to get through. In the bridge breakdown parts there is a delay timed to the song that accents certain phrases that’s panned around the stereo spectrum.

Use Guitars for Contrast – Stevens’s lighting fast playing in the verses is an interesting contrast to Billy Idol’s slower vocal delivery. The same goes for the drums. Put a little lead into your rhythm guitar playing, especially if there’s only one guitar player in the band.

Sometimes Power is All You Need – “Rebel Yell” is powerful throughout. The only real dynamic change is in the 32 bar breakdown section but even that builds and builds until it breaks into the final powerful chorus. If you have a powerful verse and a punchy chorus you might not have to add any awkward dynamics if the parts work well together to begin with. 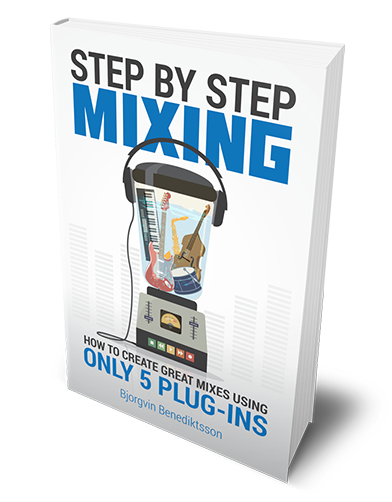 How to Create Great Mixes Using Only 5 Plug-ins.

Get Amazing Mix Results from Any DAW Using Only EQ, Compression, Reverb, Delay and Saturation.

“This is the NO BS guide to taking your mixes to the next level! Björgvin has been teaching and writing about recording for a decade, and really understands that stuff that we all struggle with in the home studio. Step By Step Mixing takes you through the full process of making sure your mixes rock from ruff to radio ready!”