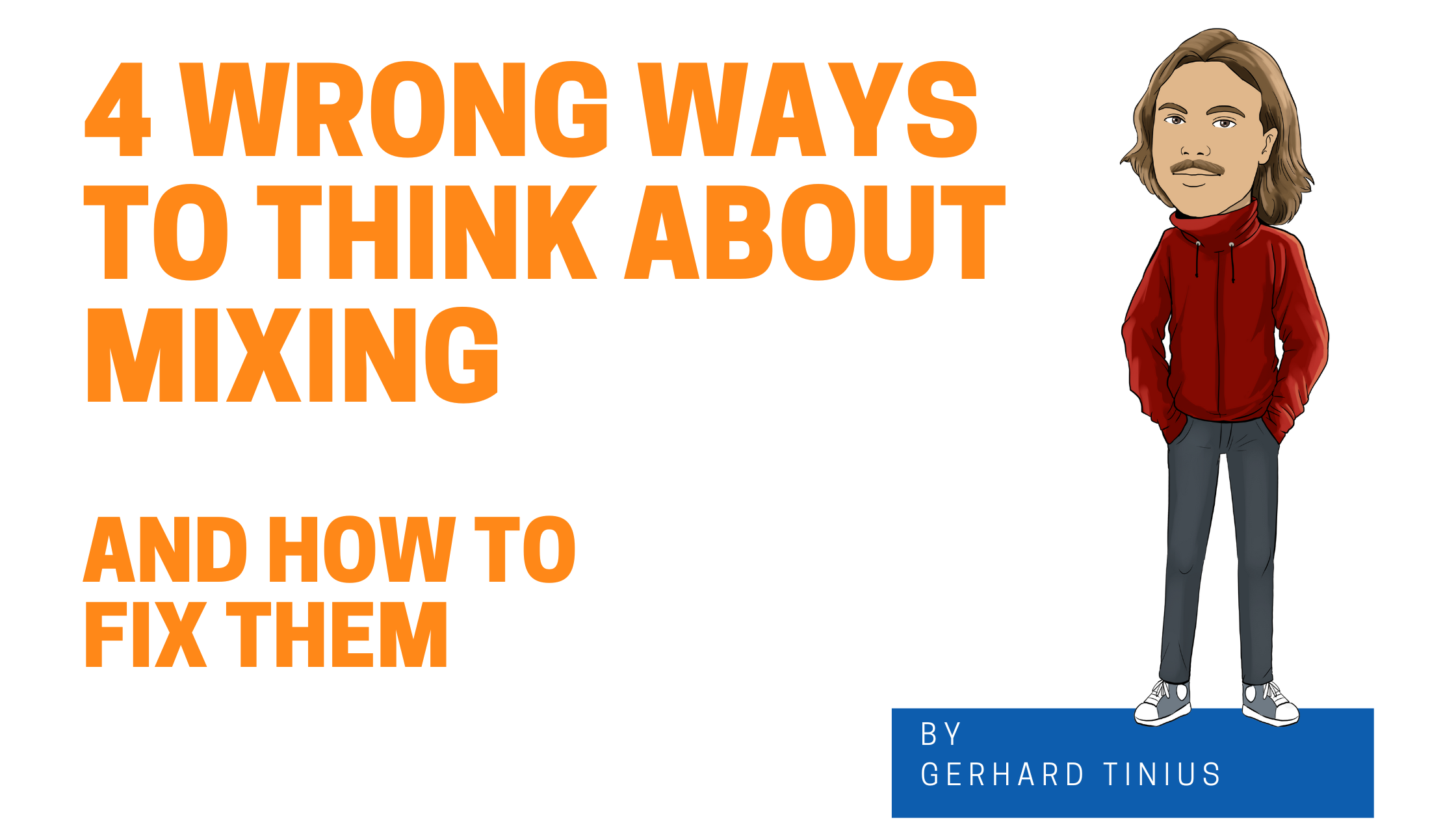 In the world of audio mixing, there are certain misconceptions that don’t seem talked about much. As a mixing engineer, it’s easy to get so caught up in the art of mixing, that you forget what mixing is truly about: Making good music sound better.

The overflow of tutorials, plug-ins, tips & tricks, gadgets, and forum debates can be confusing and frustrating. These days, many seem to focus more on the technical aspect of mixing rather than the musical aspect. So, in this article, I will go through 4 “wrong” ways to think about mixing and give you an alternative mindset to approach your next mix.

We’ve all been there. You’ve been busting your ass off to get a mix to sound just right. But no matter how much you tweak your EQ, or adjust your compressor, it just won’t sound as extraordinary as you’d like.

Alright, so you finally got that lead synth to sound as smashing as you wanted it to. Then you use that same approach on your drums. And then on your guitars. And so on. After a while, you get the feeling that everything is sounding really huge and crisp.

Then you play back the entire mix from start to finish, and you realize that everything is really just sounding squashed and weird. Frequencies and volumes seem to clash and the original energy of the song is long gone.

The obsession of today with gear and plug-ins makes it intriguing to just give everything all you got. The manufacturers promised that their plug-ins would make your mix sound as good as the pros, so why the hell not just put ’em all on there?

The reality is that more is usually not better. If you can’t get the mix to sound pretty much there with the basic five plug-in method , the problem is not that you’re not processing your audio enough. The problem is likely that you’re not using these five audio processors properly in the context of the song.

Next time when you feel tempted to go wild with your processing, take a step back. Think about the music that you’re mixing. Try to figure out what basic adjustments (using the five plug-ins method) you should do in order to make the music sound better, not the mix.

Another misconception of mixing today, is that all audio needs processing. With the tools available these days, it’s very easy to process audio. Besides the convenience of audio processing, you have all these “rules” for mixing.

Low-cut everything but the bass elements. Cut the kick at this and that frequency. Use these compression settings on your vocals, and so on.

While many of these so-called rules are very good guidelines, and excellent ways to learn mixing, they are not always right for every mix.

Depending on the genre and the goal of the mix (as well as the audio files you’re working with), you can come a long way with simple panning and volume adjustments. I would, in fact, argue that simply doing volume balancing should provide you with a mix that would sound sufficient.

It’s easy to forget when you’re mixing on decent gear, but many people will hear a mix on poor playback systems, often in mono. Where ear-candy and cool stereo processing won’t ever shine through. Thus, the volume balance between elements will on many playback systems make up a huge part of the mix.

So, while audio processing is usually necessary on most elements, it’s not a must. I often find myself not touching certain tracks in mixes, beside the volume fader. Applying EQ and compression on all elements can suck the life out of a song, because the mix will simply sound too processed.

As always you should use your ears to determine whether or not to apply processing. But never feel obligated to do so, just because that’s what you “should” do.

3. Every sound needs to push through

Mixing is extremely fun! And it’s not uncommon to get so enthusiastic that you want every single sound to sound as cool and crisp as possible. You want to show off your mixing skills as well as get every element of the song to push through, because the arrangement is so damn beautiful.

But the human brain can’t focus on too many things at the same time. And the composers of the song most likely had an idea of what elements they want to stand out.

More often than not, mixing is about making certain elements stand out, and shape other elements in a way that compliments these main-elements.

As with painting, you have a set canvas to “paint” your mix on. The human ear can hear approximately 20-20,000 hz, and that’s your audio canvas. You also have a limitations when it comes to volume/amplitude.

Imagine if you were to paint a picture where every color and every figure was to be as clear as the others. It would probably end up quite messy and confusing (although that can, of course, be a style in itself).

The same goes for mixing. If every sound is to be as loud and clear as the others, the mix will often end up messy and confusing. Instead, mix the audio in a way that makes certain elements stand out, and others work as “complimentary colors” to your main elements.

4.”Normal” people care about the mix

By “normal” people, I mean people that aren’t into mixing or audio engineering.

It’s not long ago since consumer audio-playback systems were terrible. Artists didn’t care too much for the mix either, because in the end it was the music that pushed through these low-grade playback systems, not the mix per se.

You can still hear terrible mixes (but great songs) go to the top of the charts. While audio quality has changed a lot, humans haven’t in the same way. And many people, myself included, still end up listening to most music on not-that-great playback systems.

“Normal” people care about the music that evokes certain feelings in them: Sadness, happiness, grief, love, hate, heartbreak, etc. A good mix is often just a bonus to an already great song.

The goal of any mix, in my opinion, should be to further accentuate the feeling(s) that the song is trying to evoke.

The next time you’re working on a mix, instead of simply focusing on technical aspects like how heavy your compressor is working, focus also on the feeling you’re getting from it. Music transmits a feeling, and so should a mix.