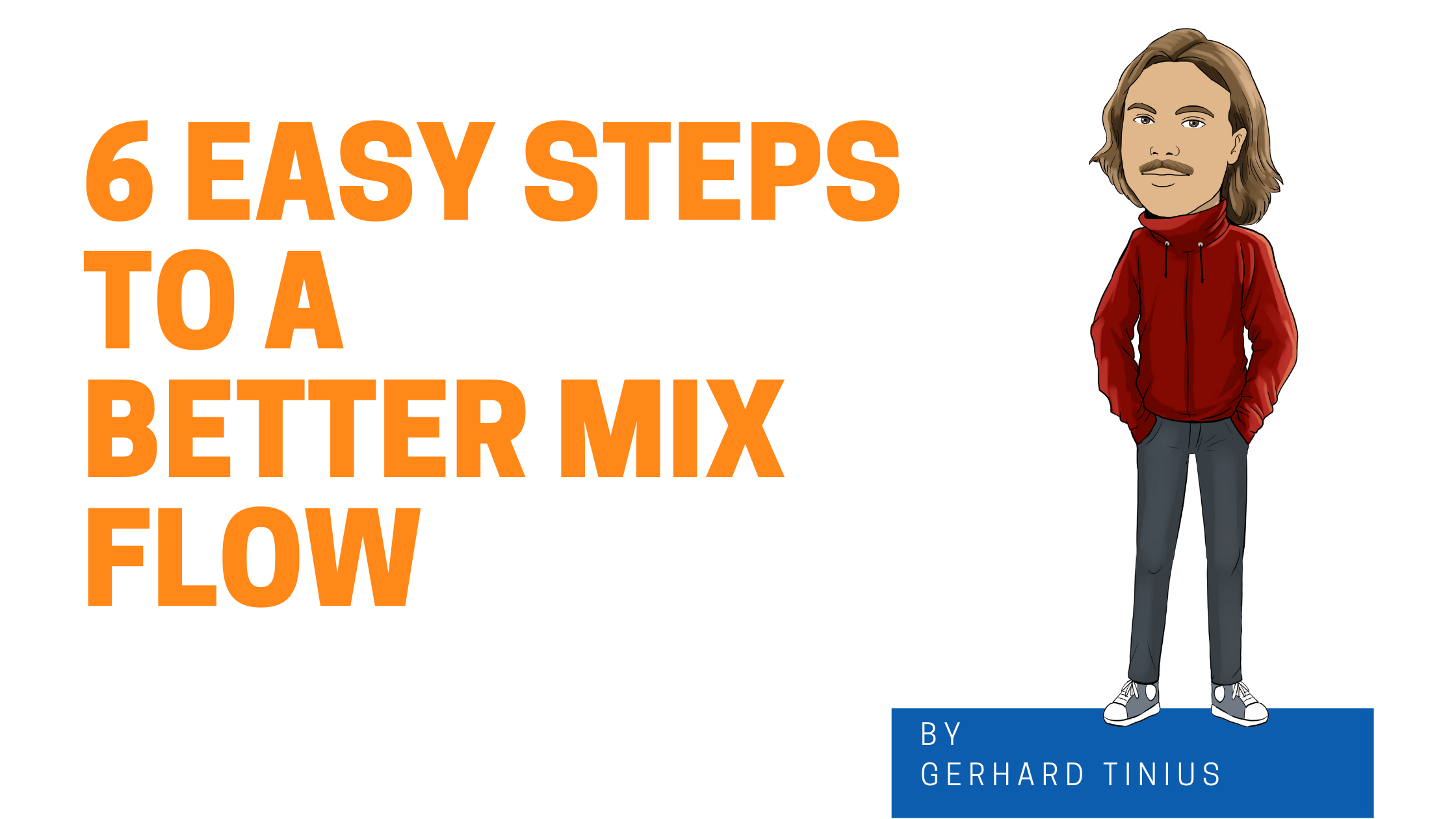 A good mix flow is crucial to achieving a good mix and working more effectively. So instead of spending endless amounts of time trying to find a specific track you need to fix because you can’t really see where it’s at, getting frustrated by too many tracks and unorganized projects, there are a few simple steps you can take to make things easier. And believe me, any good mix starts with a well-structured session.

Besides, if your mix session is well organized, you’ll have more creative freedom as you have a good overview of the song and the options available to you.

So in this post, I will go through 6 easy steps to help you towards a better mix flow and hopefully better mixes as well.

This may seem like an obvious thing to do but is easily overlooked.

Naming tracks properly makes it easier to find a certain track when you need to make adjustments to it and get a visual overview of the contents in a song. Abbreviations such as “vox” instead of vocals, “git” instead of guitar, and “bg” instead of background can help you easily identify tracks and will also take up less space.

Using keywords that help you indicate a track’s purpose in a song can also make things easier and more effective to work around. For example, if you have 5 vocal tracks, it’s good to name them based on their placement in the song. “Main vox”, “bg vox high”, “bg vox low”, “bg vox falsetto”, “pre-chrs vox”.

After you’ve named all your tracks properly, it’s a good idea to sort your tracks into groups.

Gathering your tracks into groups and placing the groups in an order that seems natural to you will help you get a better overview of the song and will make audio processing go a lot faster.

You’ll be able to see relative volume levels between tracks a lot clearer and may help you more easily identify problems within the various groups. You can, of course, also make sub-groups within your groups if you find that necessary.

When naming and sorting tracks into groups has been all done, the next step to a more organized and clean session is color coding. While sorting your tracks into groups and naming them properly really helps the efficiency and workflow of a mix, color coding will enable you to even better divide the various tracks and groups from each other. Usually, you want to use one color for all tracks within a group, but you can, of course, do it any way that seems natural to you and your way of working.

It’s way easier for our eyes to look for a specific color on a screen than a specific word written with relatively small letters. Use colors of your choosing, but by using the same colors for various instrument groups in every mix, you’ll be familiar with what the different colors indicate, and you’ll get an even better workflow.

The next step is bus tracks. A bus track is basically a track that you can route many different audio sources to, and so their output is summed into one track. Think of it as your master fader, just for a few selected audio sources.

This is really handy if you, for example, want to turn down the volume of your entire drum set, add a little high end to all your synths or add some reverb to all of your guitars. Using bus tracks will also help the various instrument groups, and the mix in general, feel more glued together and function as one piece of sound – as a song usually should.

How exactly to set up a bus track depends on your DAW, so I suggest you check out the manual or search online if you’re not sure how to do this.

A good attribute to the bus tracks mentioned above is a mix bus. A mix bus is a track that you route all of your audio to before it’s sent to the master output.

The benefits of a mix bus are many. First and foremost, a mix bus track will let you process and manipulate the sound of the entire song. If you feel the entire song is generally lacking some high end, or have too much mid-range, it’s possible to correct it with a single EQ on the mix bus instead of using vast amounts of plug-ins and processing power to solve it.

Another really neat thing about using a mix bus is that you can control the total volume of your mix before sending it out. You can do volume automations and gain adjustments without affecting the final output.

The final thing I want to mention in this post is aux send effects. An aux send effect is an effect track, usually in the form of various types of reverb, that you can route (or send) desired audio sources to, and apply effect processing on them.

The great thing about aux effect tracks compared to just slamming your effects on individual audio tracks, is that you have much greater control over the effect you’re applying. You can eq, distort, compress, etc., your effect track as if it were an audio track.

You can also adjust the input volume going into the effect as well as the output volume of the effect independently of your audio track(s).  Another great thing about aux effects is that they can help you save processing power since you can send multiple tracks to a single effect track.

They’re also great for making various instruments feel as if they’re in the same “room” or belong together since their reverberation (or other effects) are of the same character.