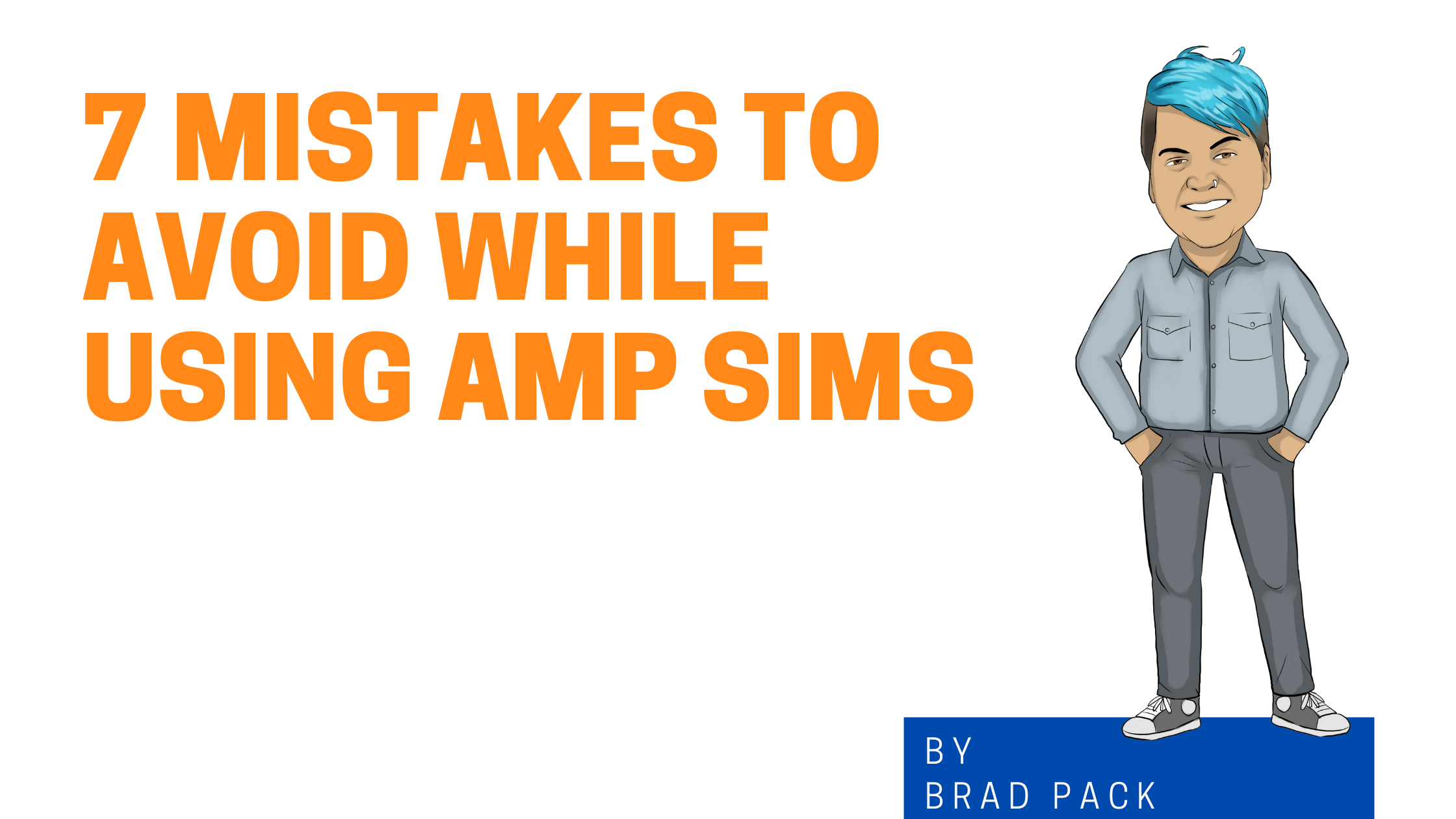 With more and more musicians recording in home studios, amp sims have skyrocketed in popularity over the last few years. However, it can sometimes be tricky to dial in a convincing tone or shape your sound to fit with the rest of your mix. In this blog, we’ll break down some of the biggest mistakes people make when using guitar amp simulator plug-ins and share what you should do instead to capture a rich, powerful sound.

Mistake #1: Only Processing the Signal AFTER the Amp Sim

If your raw guitar track sounds muddy or harsh, it’s only going to be more complicated to correct this issue after the signal has been processed by the amp sim. Not only will it be difficult to isolate the specific frequencies using the tone controls, but the additional harmonics created from the amp can also cause problems that spread throughout the frequency spectrum.

To solve this issue, place an EQ before the amp sim to roll-off any unwanted low end, tame any harshness, and remove any frequency resonances. Generally, it’s best to use a neutral-sounding parametric EQ, like FabFilter Pro-Q  3 or soothe2.

Just because you’re using an amp sim doesn’t necessarily mean your whole signal chain needs to be digital. Instead of relying on whatever effects come bundled with your amp plug-in, bust out your pedalboard, and use your favorite effects to spice up your performance.

Not only does it help you capture your signature sound, but it also helps recreate a more realistic starting point for the amp to work with. That’s why most guitarists start using pedals in the first place—they’re not happy with the sound coming out of their amp.

You don’t have to go full-Rob Scallon and break out every pedal you’ve ever owned, but a few simple pedals like EQ, compression, and distortion or overdrive can really enhance your starting tone.

Mistake #3 Using the Presets (Without Tweaking Them)

Look, I don’t have anything against presets—I use them all the time in my mixes. But amp sim presets tend to require a bit of tweaking in order to sound natural. They’re designed to sound exciting and stimulate your ears. But listening to a guitar tone out of context can be detrimental to your mix.

In order to catch the attention of someone who’s quickly scrolling through presets, the settings are typically overexaggerated with tons of gain, a big boost to the bottom end, a massive cut in the midrange, and a blistering high-end shelf. It may not be the case with all presets, but generally, you can achieve a more natural tone by dialing back each of the settings a bit.

It’s totally fine to use a preset as a starting point—just be sure to experiment with the settings to see if you can improve the sound. For best results, try tweaking the tone without soling the guitar—this provides a better context for how the track will sound in the mix and allows you to make a more informed decision.

Obviously, gain staging is an important part of mixing any track, but improper gain staging is likely to cause a noticeable problem with almost any amp sim. Most amp sims are designed to accept signals around -18 dBFS. It’s ok if the signal peaks a bit higher, but if your track is consistently hitting above this level, it can cause unwanted distortion.

It’s also important to note that many amp sims emulate preamp and power amp saturation, making gain staging a powerful tone shaping tool. Make sure the signal isn’t too loud coming into the amp, and pay attention to the preamp and power amp stages to dial in the perfect amount of distortion without any artifacts.

Mistake #5 Relying on the Tone Controls for EQ

Sure, it sounds cool to scoop the mids and crank up the bass and treble, but that doesn’t always sit well in the mix.  The tone controls are meant to help you subtly shape the sound—not perform miracles.

That’s why it’s best to use gentle boosts and cuts to create broad tonal changes. Make any detailed adjustments using a traditional EQ placed after the amp sim. For instance, it’s common to use a bell shape with a narrow Q to notch out any harsh frequencies in the 3-5 kHz range—something that would be impossible using the tone controls.

Mistake #6: Adding Too Much Compression

This tip applies while mixing any guitars, but is particularly relevant to heavily distorted genres like punk and metal. Distortion is a form of compression, so the more distorted your guitar track is, the less compression it needs in the mix.

However, compression can be a powerful tool for controlling levels, as well as tone. Instead of using a traditional compressor on your guitar tracks, try using a multi-band compressor to focus on the areas that need attention.

For instance, try using a multi-band compressor to tame the low-mids of a guitar track (around 80 Hz – 300 Hz). This can be especially useful when working with palm-muted parts. This helps retain power in the low-end while playing sustained notes and chords while providing clarity during heavy chugging sessions.

Nobody listens to a guitar with their ear up against the amp (not for very long, anyway). Our ears are trained to listen for the sound of the guitar amp bouncing off of the walls of the room to help us determine what kind of space the song is in. Using a completely dry guitar tone can choke the life out of a mix. That’s why it’s always a good idea to create a space for your guitar amp to live in.

It might be a small, well-treated recording studio, or a large open concert hall depending on the song. What’s important is that you dial in some kind of space to help the listener immerse themselves in the music. Some amp sims include built-in reverb options, but you can always create your own space using your favorite reverb plug-ins.

Follow these tips next time you’re working with an amp sim plug-in for a powerful, natural-sounding guitar tone.