Do you ever make comparisons between yourself and amazing musicians? 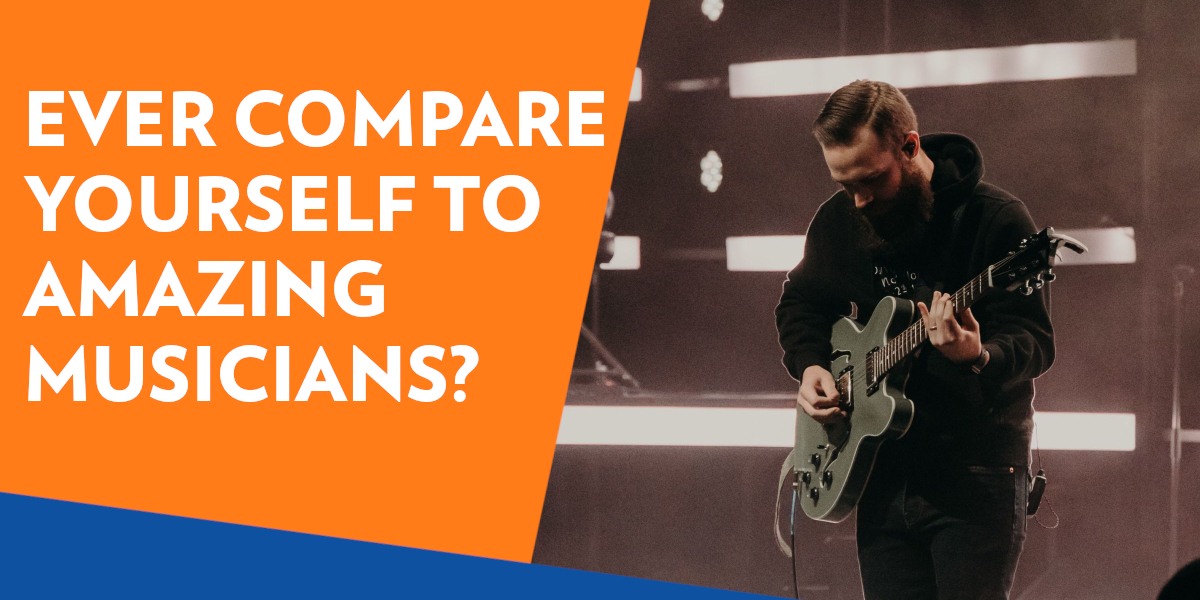 Have you ever compared yourself to musicians at the very top of the industry? I’m talking about the Grammy Award-winning artists that make music look effortless.

Well, if you have made those comparisons, I don’t blame you. There’s so much content available to consume right now that it’s only natural. Our brains automatically connect the dots, fill in the blanks and create conclusions without you even thinking about it.

We only see the highlights

When you’re following an amazing musician on social media or read the highlights of their career, they’re just that… highlights.

You rarely see the sheer hard work and struggles that have built the career of any amazing musician.

Comparing where you are now with the highlights of someone ten or twenty steps ahead of you is only going to lead to problems.

It’s not an accurate or fair comparison.

Instead of focusing on the power of your own journey and the path you’re on, you’ll wonder why you don’t have what they have.

I’ll share an alternative in a minute but first, let’s look at the more superficial side…

It’s easy to watch your favorite guitarist playing a super expensive shiny instrument and get envious. It’s the same as watching a tutorial and wishing you had the vintage synth the producer is playing.

Yet the truth is that neither person started out owning that gear, and the gear doesn’t make the musician.

Do you know anyone who learned how to drive in a Lamborghini? I doubt it, but if you do, please leave a comment and share the story down below!

So, if you wouldn’t learn how to drive in a Lamborghini, does it make sense to draw a similar comparison in music? Should you spend the same money on gear as musicians who have already hit levels of stratospheric success?

The answer is no. You build your own highlights, and the quality of the gear and plugins you use grows over time if you choose.

Now, I said I’d share an alternative approach, and here it is…

The Incredible Power of Modeling

No, I’m not talking about getting on the catwalk here. What I’m talking about is examining the careers of the amazing artists, engineers, songwriters, or producers you love. Then, you can copy a lot of what has worked for them, along with aspects of their positive behavior.

There are many reasons for their success, and you can find the gold in any successful person’s story. Once you do, you can apply it to your own journey and see if it works for you.

That will set you apart and fast-track your success. It could be something as simple as a vocal warmup or a method of creating song ideas, but whatever it is can be adapted to suit you.

Modeling is different from making direct comparisons because you are not comparing like with like. You’re finding the gold nuggets that are currently missing in your development.

Once you find and apply those, it’s like all the lights have been switched on, and everything is much more clear.

There is, however, one major mistake that a lot of people make in this process that I want you to avoid.

Don’t reference other artists when writing

If you’re trying to write in a particular style or pitch to a specific artist, it makes sense to listen to some of their music. But when it comes to writing, I strongly advise against listening to those tracks as you write.

Creating a unique melody is tricky enough without an existing song influencing you. While it might tempting to “borrow” heavily from another song, it’s a fast track to a lawsuit. It’s also nowhere near as much fun as creating something out of nothing.

One modeling alternative would be to find common chord progressions in hit songs. You can then take one of those and create your own unique melody and lyrics.

While I don’t believe in reference during the writing process, it is fundamental in mixing. It’s the most important step every mixer must take when it comes to creating a stream-worthy mix.

Referencing as part of your mixing method

Every smash hit you hear has been touched by the greatest mixing engineers our planet has to offer. You can use that to your advantage in a major way.

For example, here’s what to do if you feel like your mixes sound harsh all the time:

You can do this for EQ, compression, reverb, delay, and any other part of the process you want to work on.

I have an entire reference excerpt set as part of my template, and I also pull in song-specific references for every new mix.

Referencing is so important in mixing that I created an entire book with an audacious title. It’s called…

The one hack that guarantees a unique, professional-sounding mix

The key to a unique, professional-sounding mix is to reference early and often throughout the process. But we often misuse reference tracks or at least don’t use them to their full potential. If you’d like to know how to use reference mixes effectively in each part of the mixing process, then click here to download the free guide.

Be appreciative of their gifts, celebrate their success, and see what you can learn from it.

While you’re doing that, don’t forget to have fun making great music!

Stephen is a songwriter, producer, and mixing engineer from Dublin, Ireland. His mission is to help musicians and engineers create stream-worthy music without spending a fortune on gear.

He has produced and mixed music for independent and major label artists, as well as producing award-winning audio for animated series, Fortune 500 companies, and AAA games. You can learn everything you need to about his methods on his site, Understanding Audio.