Explained: 8 Great Reverbs and When to Use Them 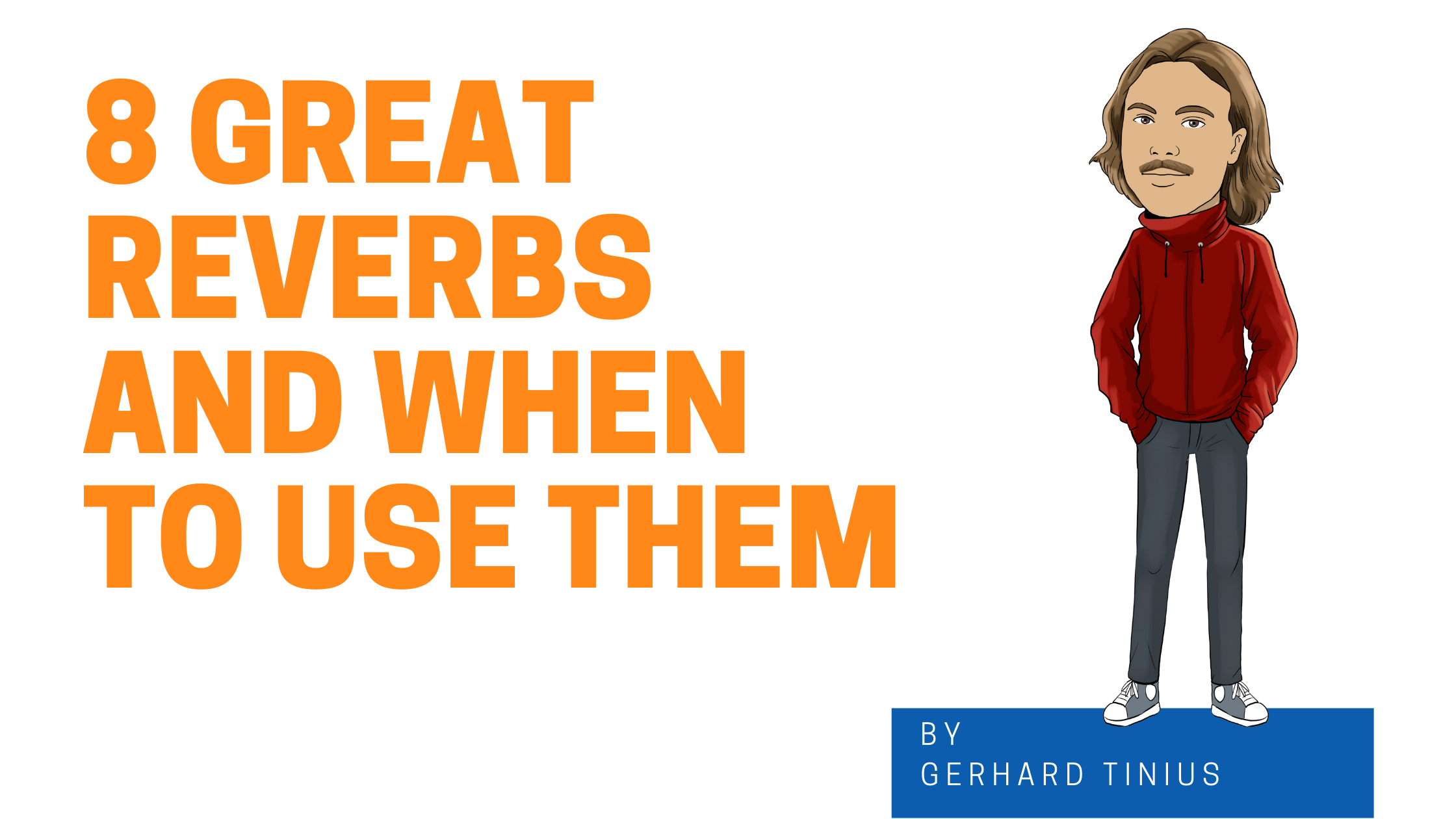 So in this post, I’ll go through 8 of the most common reverb types and their most common uses.

Room reverbs emulates “the sound” of a room. If you walk around your house or any building, you’ll discover that different rooms sound different. That’s the reason for room reverb – to place whatever element you’re mixing into a physical (usually simulated) room.

Room reverbs work great to make elements flow better together as if they were in the same room. They also work wonders to breathe more life into dull and dry sounds without the reverb taking up too much space. They’re also great for making digitally created sounds more natural and realistic.

Most reverb plug-ins have dedicated room presents. If not, you can create your own by having a small to large-sized decay time (ca. 0.3 sec – 2 sec) with a relatively short pre-delay of 4-30 ms, depending on the room you want to create.

Hall reverbs are kind of like room reverbs, just bigger. Imagine a concert hall or a big indoor space.

Typical for hall reverbs are long decay times of about 2 to 4 seconds with fairly longer pre-delay than a regular room reverb. Due to the large space, the sound of a hall reverb will feel less dense than a room reverb. Cutting the high and low end on your reverb plug-in can therefore help better simulate the sound of a big hall.

Typical uses of hall reverbs are on orchestral instruments, pianos, and productions with a few elements that need a little help to fill out that empty space.

Cathedral (sometimes called church) reverbs are even bigger reverbs than halls. If you’ve been in a cathedral or church, you’ll most likely recall the huge amount of reverberation in there.

Besides the size of the actual room, cathedrals and churches are built with highly reflective materials, resulting in a very long-lasting decay time.

Chamber reverbs are reverbs created inside a reverb chamber. A reverb chamber is a room designed to reflect sound in a certain way by using reflective materials on walls and ceilings. It’s also common to place various elements within the room to shape the tone and density of the reverb.

While you most likely don’t have a room in your house you want to dedicate to be a reverb chamber, you’ll luckily find plug-in versions of this.

Given the characteristics of chamber reverbs, they’re great to use on guitar, vocals, drums, and other tracks you want to be prominent in the mix.

Ambience reverb is a kind of reverb that more or less only produces early reflections. Early reflections are the first reflected soundwaves that hit a listener after being reflected on a room’s surface.

Ambience reverb doesn’t necessarily reverberate a sound in a traditional way, but gives more depth and character by adding these early reflections you would find in any physical space. Humans use early reflections to determine the size of a space we’re in. The longer it takes for a sound to reflect, the bigger the room.

Ambience reverb is great to use on any dry sounding element that you want to give some movement and character, without it being too noticeable and reverberating. Typically synths and other computer-generated sounds will benefit greatly from ambience reverb.

Traditionally, plate reverbs are physically built. A plate reverb consists literally of a big, metallic plate inside a box. A microphone is feeding a signal in, and a second microphone is picking up the vibrations from the plate. This yields for a very distinct, synthetic-sounding reverb.

The construction of a plate reverb gives the possibility to create very short-lasting reverberation and long-lasting ones. And as I’m sure you’re well aware of already, you don’t need a physical plate reverb anymore. There are plenty of plug-in options out there, both free and paid.

Plate reverbs are great for any element that you want to give a synthetic, unrealistic reverb sound. Plates are a go-to for vocals, but do very well on synths and guitars, as well as drums and horns.

A spring reverb is very similar to the plate reverb mentioned above. The difference is that a spring reverb uses an actual spring to reverberate the incoming sound.

The sound of a spring reverb sounds quite literally like a spring. It’s bouncy, short, and prominent. While you’ll usually find spring reverbs inside a guitar amp or a recording studio, they’re broadly available in digital format as well.

Spring reverbs typically provide more low end than high end, and this is something you’ll want to keep in mind when deciding if you want to use a spring reverb or not. They’re typically associated with a more old-school sound, but can work well in today’s music as well. Typical uses of spring reverb are on vocals and guitars.

While convolution reverbs aren’t as broadly used as previously mentioned reverbs, they can really come in handy and works well on any element.