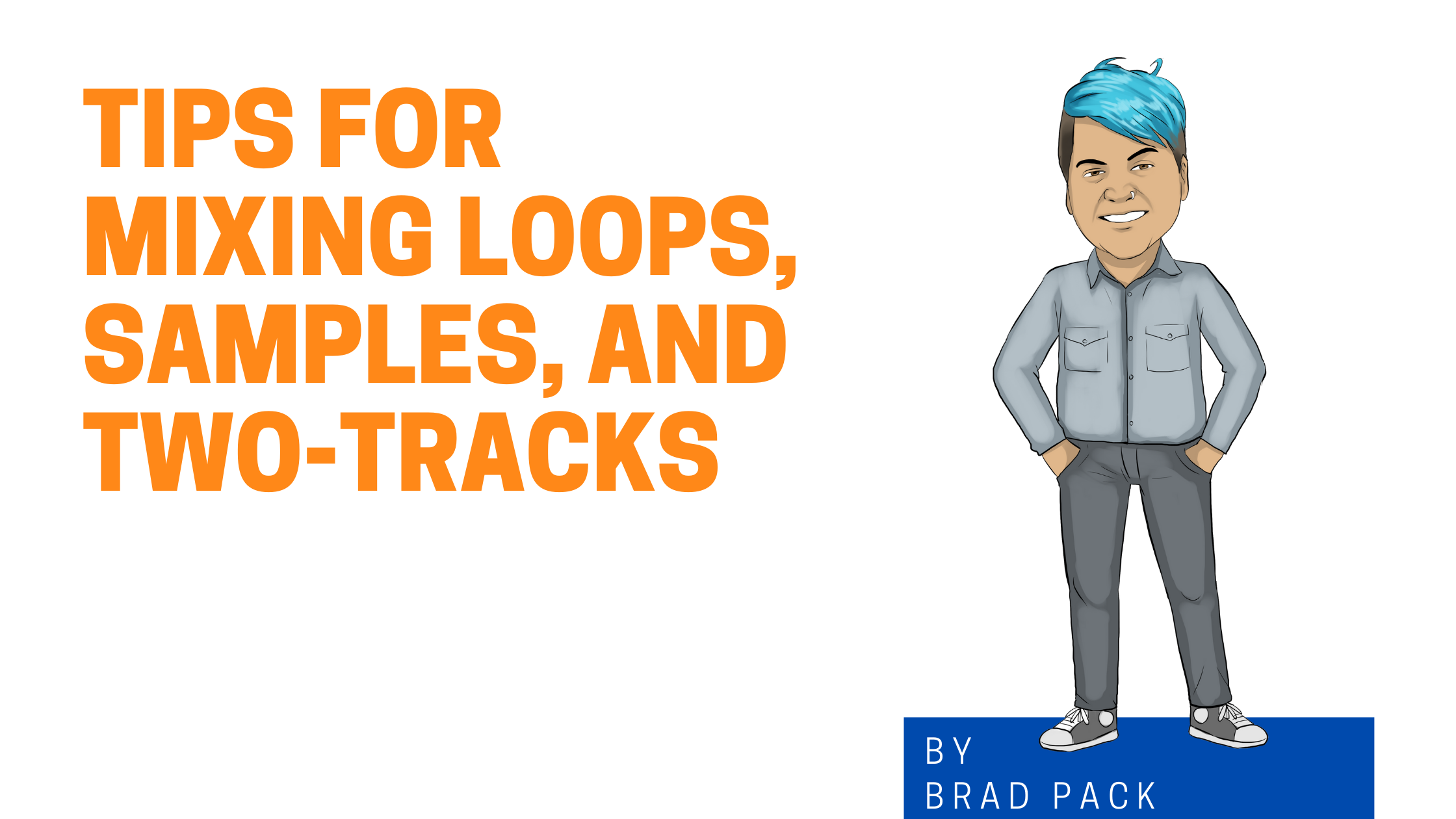 Over the last few decades, it’s become increasingly common for commercial productions to use pre-made loops. And while they can add the perfect texture or tone to a track, they can sometimes be difficult to mix.

In this blog, we’ll share a few of our favorite tips for working with loops, samples, and two-tracks to help you dial in a cohesive mix.

Before you slap a multi-band compressor across your mix bus, it’s important to think about what kind of track you’re working with. Let’s talk about the difference between loops, samples, and two-tracks.

Generally speaking, a loop is a pre-recorded piece of music that is used alongside original recordings in a track. It could be a single instrument or an entire ensemble, but it’s never intended to be the full instrumental track. It is always meant to be accompanied by additional recordings. In most cases, loops are pre-mixed, meaning they don’t require much processing to get them to sound good. However, it can take some work to get them to sit right in your mix.

Depending on who you’re talking to, a sample could mean one of two things. A “one-shot” sample is a short clip of a single instrument, like a kick drum or even a vocal adlib. Some one-shot samples are processed, while others are “dry” and designed for you to sculpt and mold as needed.

In some cases, a sample can refer to a sampled record. This could be a single instrument like a drum break or bass groove, or a full arrangement. Hip hop producers have been sampling vinyl records for decades, blending classic records with modern sounds. Since the original recordings are fully mixed and mastered, the challenge is making them gel with the rest of the production.

A two-track is a fully produced instrumental track or beat that’s used as a music bed for a vocal performance. In this case, your main goal is to make sure the vocal and the instrumental sound cohesive together. Otherwise, it will sound like a karaoke recording with an instrumental track, and a vocal slapped on top.

Now that you know the difference between loops, samples, and two-tracks, let’s take a look at some tips for mixing each type of track.

When mixing loops, your first step should be to clean up the track and get rid of any unnecessary information. For instance, if you’re working with a bass loop, use a high-pass filter to roll-off any unwanted low-end. Depending on your arrangement, you may also use a low-pass filter to roll off the highs to make room for other tracks.

When working with a recording that features multiple instruments, you may want to adjust the balance of the loop to better suit your track. EQ can sometimes be an effective solution, but multi-band compression allows you to isolate each frequency range, which makes it easy to bring instruments forward or backward in the mix.

Next, use bus compression to glue to loop together with the rest of the tracks in the mix. Subtle settings like slow attack, fast release, and a moderate ratio can help make your track sound more cohesive.

Your approach to mixing one-shot samples hinges on whether they’re dry or pre-mixed. If the samples are dry, you can treat them just as you would any other track in your session.

If the samples are pre-mixed, the goal is to make sure that they gel with the rest of the tracks in the session. For instance, if your samples are heavily compressed or dripping with reverb, you’ll need to treat the rest of your tracks with the same approach—otherwise, the samples will stick out like a sore thumb.

Creating beats with sampled records is often considered an art in its own right. It can be tricky trying to balance gritty vintage recording with sleek modern sounds, but with a little work, you can bring the two together like Salt-N-Pepa.

Start by using a low-pass filter to roll-off any hissing, crackling, or “vinyl sounds.” In some cases, like with a sampled bass groove, you can roll off quite a bit of high-end without negatively affecting the sound of the track.

If you’re working with a sampled instrumental loop like a strumming guitar or string ensemble, you can use a high-pass filter to roll-off any unnecessary low-end. However, when working with drum recordings or full arrangements, you’ll need to be careful not to cut off too much detail.

If you can still hear crackling or popping sounds, you may need to use a special noise removal tool—iZotope and Waves both make popular plug-ins designed for repairing damaged recordings.

Next, you’ll need to examine the role the sample is playing in the song. If you’re going to reinforce arrangement with your own parts by doubling the performance with modern instruments, you can be a little more aggressive when filtering.

If the sample is going to be a focal point in the mix, use a gentle bell EQ to create a subtle boost to bring out the heart of the sample. This will vary depending on the track, but you may boost the lows to beef up a bass groove, the mids to bring out a guitar, or the upper-mids to enhance a string ensemble.

Next, use subtle bus compression to glue the tracks together. If you’re having a hard time getting the sample to sit right in the mix—like it sounds good most of the time, but it gets lost in the chorus—try using a multi-band compressor on the mix bus to prevent masking.

Personally, I’m not a big fan of working with two-tracks. I always advocate for the artist or producer to provide the full multi-track session—or at the very least, stems for each instrument.

If you find yourself in a situation where you have no other option, there are a few tricks to help make the instrumental and the vocal sound cohesive.

Reverb is another powerful tool for helping create the illusion that these tracks were recorded in the same space. However, it’s important that you choose the right reverb for the job.

If the two-track already has reverb printed to the track, add a reverb to the vocal that matches the general vibe of the two-track. Try to identify if it’s a room or hall or plate reverb, and match the decay time as best you can.

If for some reason, you’re unable to match the reverb sound, you could try using a special reverb removal plug-in to “de-verb” the two-track.

If the two-track is dry, you’re free to apply whatever reverb you like—just make sure you apply the same reverb to both tracks to make it sound like they are playing in the same space.

Follow these tips the next time you’re working with loops, samples, and two-tracks for a cohesive-sounding mix.