Tips for Recording Vocals and Acoustic Guitar at the Same Time 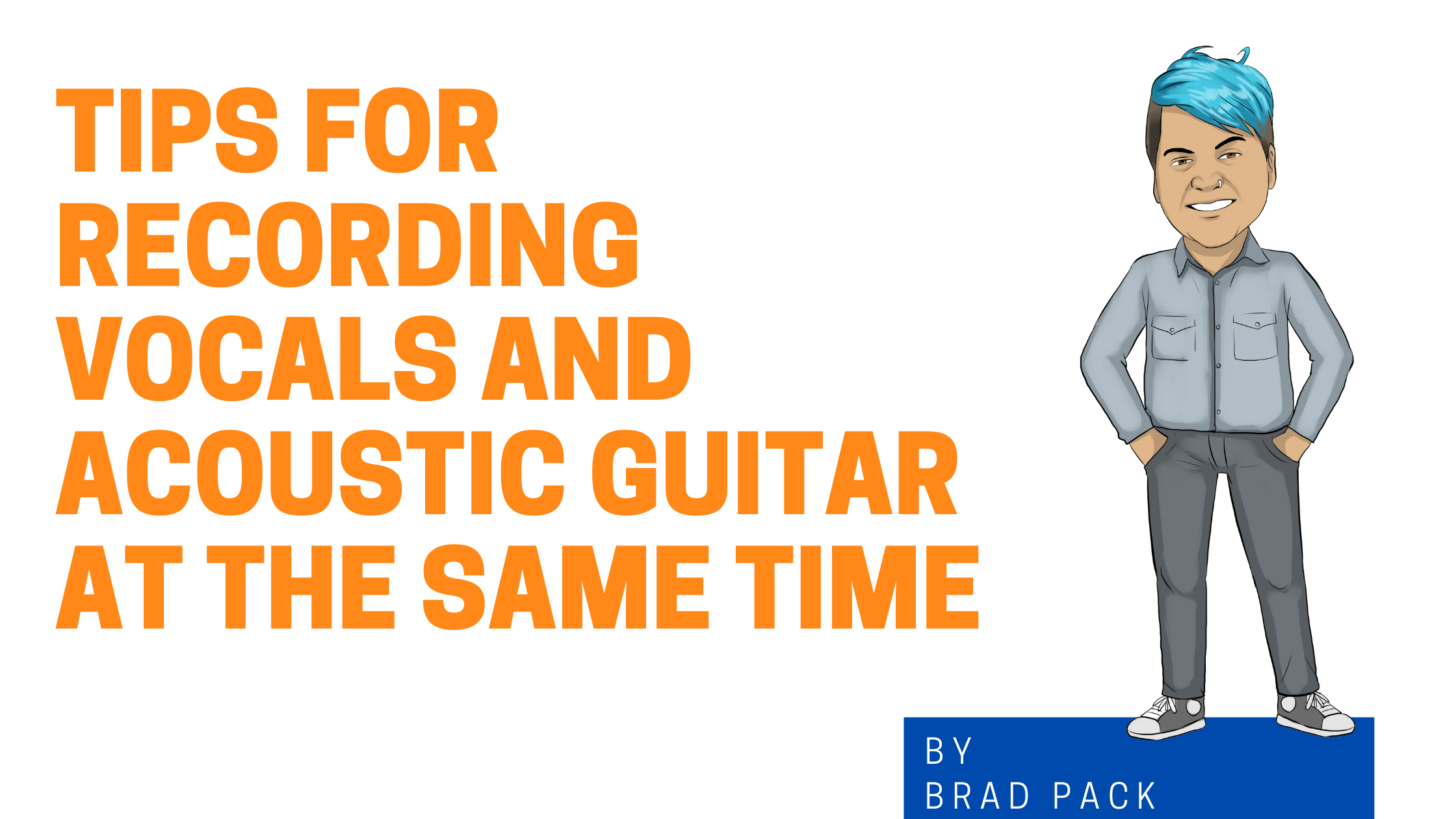 Whether you’re recording a quick demo of an original song or an intimate ballad with a singer-songwriter in the studio, knowing how to record vocals and acoustic guitar at the same time is a crucial skill for any engineer.

With so many different techniques available, it’s tough to know which approach will sound best for your song. That’s why we put together this guide to help you decide which technique to use when recording vocals and acoustic guitar at the same time.

This approach offers a good blend of direct and ambient sound—and with only one microphone, there’s no risk of phase problems when recording.

This setup is very comfortable for the artist, which helps them deliver their best performance. However, it can be difficult to adjust the balance of each instrument when mixing, which means this approach is best for artists who are very precise and controlled.

Another similar approach is to use both sides of a bi-directional microphone to capture the vocals and guitar separately.

In your DAW, duplicate the recording and reverse the polarity on the new channel to isolate each side of the capsule for independent control over the ‘vocal side’ and the ‘guitar side’.

The fastest, simplest way to record vocals and acoustic guitar at the same is to use a DI for the acoustic and a dedicated mic for the vocal. This approach provides the most separation between instruments, making it easy to process each instrument separately when mixing.

However, you’ll probably need to do a fair amount of tweaking to get the guitar to sound good, as the direct output of an acoustic guitar typically sounds brittle and thin.

Start by setting up your favorite vocal mic and dialing in a good vocal sound. Make sure the artist feels comfortable performing after you find the right placement.

Then, use another mic to capture the sound of the guitar. The specific placement will vary from session to session, but I like to start by pointing the mic at the sweet spot—near the 12th fret, where the neck meets the body of the guitar.

This approach provides a natural, balanced tone with plenty of separation between each instrument, making it easy to mix. However, using two mics can create phase problems, which can make it difficult to find a mic placement that both sounds good and is comfortable for the performer.

Another common approach to recording guitar and vocals at the same time is to use a mic to capture the performer’s perspective. Start with one mic in front of the artist to capture the sound of the guitar and the vocals, similar to the Room Mic approach above.

Then place a second mic placed behind the performer—next to their right ear, pointed at the floor in front of the artist. This mic captures what the performer hears, with a direct vocal sound and an ambient guitar sound that complements the first mic.

This technique can create an even, balanced tone with a variable amount of ambiance, making it a solid choice for any session. The mic placement also makes this approach a good choice for performers who feel restricted by mic stands.

However, since these mics are facing in opposite directions, it’s important to remember to reverse the polarity on one channel to avoid phase problems.

Perhaps the most versatile option on this list, the three-mic approach combines a dedicated vocal mic with a stereo pair of mics to record the guitar, allowing you total control over the balance between each instrument and the amount of room tone.

Start by placing the vocal mic, then focus on dialing in the guitar sound. With two microphones left to record the guitar, there are several options to choose from.

One common approach to recording acoustic guitar is to use a stereo pair of small-diaphragm condenser mics. If you’re looking for a close, direct sound, try placing one mic at the sweet spot and the other near the bridge. Just be cautious, as this approach is prone to phase issues.

If you’re looking for more ambiance, try using an XY positioning. Move the mics closer for a more direct sound or farther back for more room tone. This approach provides a wide stereo image—just be careful not to move too far back, otherwise, the image of the guitar collapses into a stereo room mic.

If you find that you prefer the sound of the close mics, but miss the ambiance of the XY setup, try using the spaced pair setup and adding a fourth (or fifth) mic a few feet back to capture the sound of the room. Just remember that the more mics you use, the more difficult it will be to tweak the sound when it comes to mixing.

The mid-side technique provides a natural, balanced tone with decent isolation and spacious stereo imaging. For this approach, you’ll need two mics; one with a bi-directional pickup pattern, and another mic of your choosing.

Depending on the sound you want, try mic with a cardioid or hyper-cardioid pickup pattern for a tight, focused sound, or a mic with an omnidirectional sound for a more ambient sound.

Start by placing the ‘mid’ mic pointing towards the performer. Use the guidelines above in the Room Mic section to dial in the right sound.

Then place the ‘side’ mic directly beneath the first mic, at a 90-degree angle from the instrument—so that either side of the capsule is pointing towards the walls, not the instrument.

This mic will capture the sound of the room with a wide stereo image. However, it will require a little extra work in your DAW.

Similar to the Bi-Directional Mic approach above, you’ll need to duplicate the ‘side’ mic channel in your DAW. Reverse the polarity on the new channel to isolate each side of the capsule, then pan one side hard-left and the other hard-right.

Blend the ‘side’ mic channels in with the ‘mid’ mic to control the amount of ambiance in the mix.

Use these techniques to help you capture the perfect tone the next time you’re recording acoustic guitar and vocals at the same time.