10 Things to Keep in Mind When Mixing 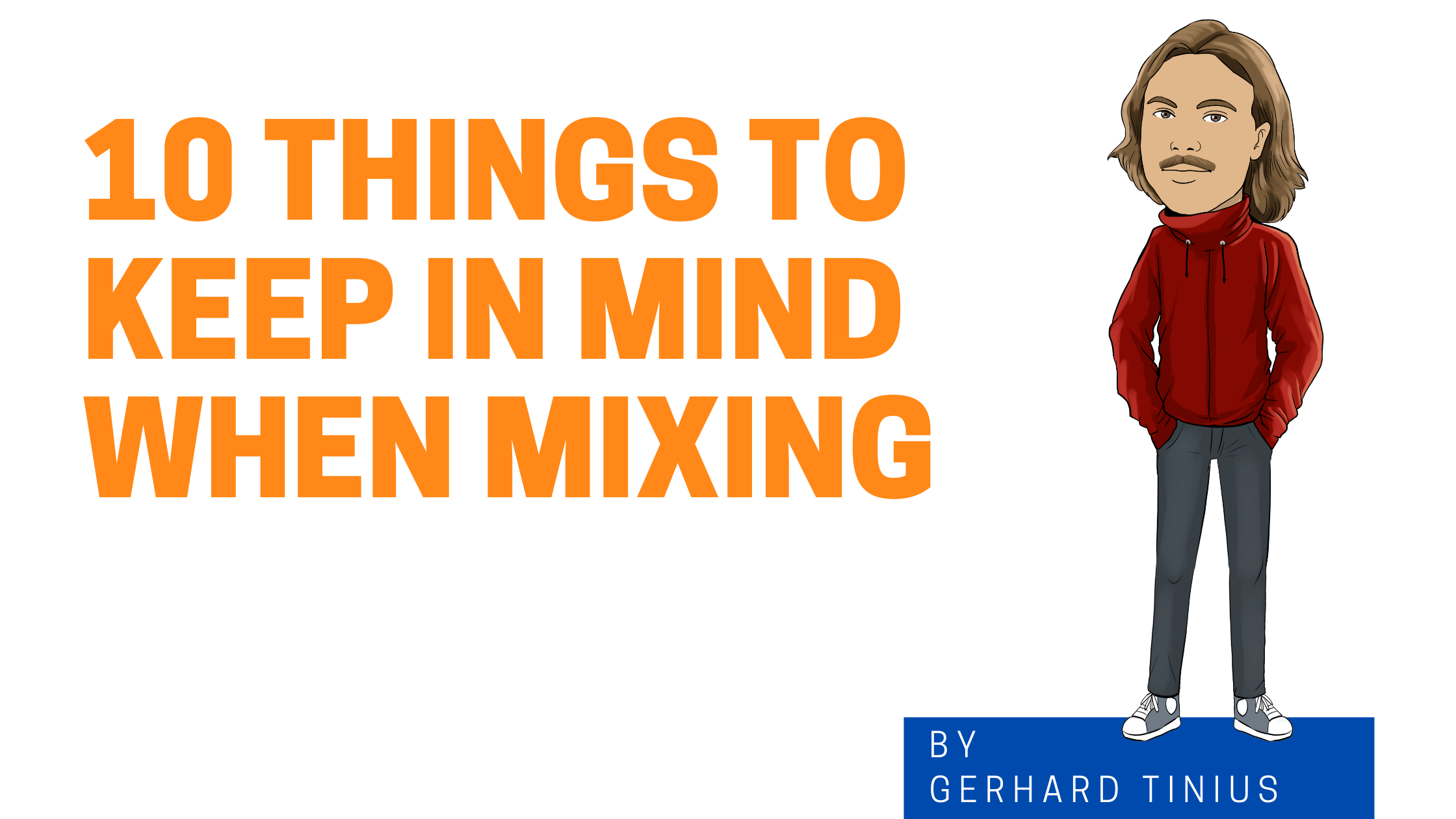 What to do and when to do what can often be confusing when mixing. Equalizing, compression, reverb, automation, leveling, panning, editing, quantizing, and so on. The possibilities are endless.

Categorizing different things and making some sort of system can be a great way to make mixing less confusing, more effective, and in many ways more simple.

Personally, I find it useful to separate between two main concepts, and they are “big picture” and “details”. Because that’s in some ways all a mix consists of.

You have the actual song – the melodies, lyrics, rhythms, and harmonies people will hear (big picture),  and then you have the sonic aspects –  panning, reverb, effects, and so on (details).

A great way to start any mix, is figuring out and setting the overall mood and energy. What kind of emotions and vibes are the song trying to express, and what needs to be done in the mix to help amplify those things?

Once you know what you’re looking to accomplish in a mix, the means of accomplishing it becomes way easier.

This is similar to the point above, but with a more sonic perspective. Figuring out what kind of “room” your mix is supposed to be in, makes it easier to shape that “room” and overall sonic feeling of a song.

Tone means what the frequency spectrum should be like, i.e. the tone knob on a guitar or bass. Is the mix supposed to have a lot of high frequencies and be extremely sharp and crisp (bright tone), or should it feel more mellow and less intrusive (dark tone)?

What story is being told?

Being clear and conscious about the story a song is trying to tell makes mixing way easier.

If you focus on mixing a song in a way that helps transmit the story of the song, you’ll spend less time hassling with getting the “perfect” equalizer on the snare or getting the ultimate compression response on the guitar. You’ll spend more time making the mix fit the song and help transmit the story it is telling in a professional matter (which to me is what ultimately makes for a great mix).

Once you’ve figured out the points above, it’s time to make the rhythm and overall feel of the song fit the story, tone, and mood. Getting the rhythm and feel to correlate with the above points is often not so complicated if you know what you’re trying to achieve.

Gain staging, basic equalizing, and simple dynamic processing are often all it takes. The key thing to keep in mind is that the rhythm and feel should push through the mix in any listening environment, so while the means to achieve your desired result may be simple, the work is very delicate and should be done with care.

You can’t fix a terribly recorded vocal track with plug-ins. You might make it better, but you won’t make it amazing. Same goes with synthesizers and programmed drums and so on. You can equalize a bad sounding audio source into a good one, but it won’t become great unless the original sound fits the song and serves it purpose.

Panning and movement within the stereo-field is something I consider to be a smaller detail. Not because it doesn’t matter, but because it shouldn’t be the thing that makes a mix.

And while panning and movements can add something truly remarkable to a mix it shouldn’t be the thing that makes or breaks it.

Audio effects like delay and reverbs, phasers and flangers, and so on, are great attributes to a mix. In some cases, effects like these are crucial to a song. But in a mixing setting, they serve their purpose better after the “big picture” of the mix has been figured out.

While reverb and delay are literally what sets the room-feel, it’s a good idea to place your audio in these rooms after balancing, equalizing, and sorting out the audio as it is.

If you make a mix as good as possible – basically finished, before even applying audio effects, imagine how good it will sound when you then apply them.

Ear candy – small, satisfying sonic tricks and treats – are similar to my point about panning and movement. While ear candy is a great attribute to a mix, it can only be heard in certain listening settings.

Ear candy is also rare and short-lasting. Maybe it’s a cool effect just at the transition between verse and chorus, or a funky twist in the middle of your drop. That’s great, but it shouldn’t be the stuff you feel makes your mix truly stand out as a good.

They make great contributions to the overall mix, but they’re also things that should be an attribute to an already good sounding mix.

Imagine if you were to play the song live. Fade-ins, fade-outs, etc. wouldn’t be possible. A good song/mix should sound good as it is, and become even better sounding with small details like the things mentioned above.

Imaging, like panning, movements, and pretty much all the points mentioned above, is something that should just add something extra to an already good sounding mix.

Imaging is also something that can only be heard in certain listening environments, and thus shouldn’t be the thing that makes or breaks your mix.

A lot of the points I’ve mentioned are similar in style, but are necessary to divide up in order to get a good overview and system of the art of mixing.

I’m not trying to tell you that some things are more or less important in a mix, because every mix is different. Some genres depend heavily on small details, while others don’t require much more than basic leveling.

What I’m trying to do is to give you pin-points and things to keep in mind when mixing in order to make it less confusing and more effective, and ultimately help you make better mixes.

Gerhard Tinius is a groovy producer, mixer, and audio engineer from Norway. Working as a mixer and audio/mastering engineer while releasing his own music under Tinius. See more about him here