We all have to start somewhere. Most people will go through a series of objectively average mixes before they start to refine their skills and understanding. Flying blind is one of the most powerful ways to integrate a lesson, but it definitely helps to have some insight going into it.

You will make mistakes along the way – but it helps to be able to identify and be aware of them sooner rather than later.

Here are some of the most common mixing mistakes made by beginners!

The loudness wars have been going on a long time, a trend that has nearly completely destroyed the once beautiful dynamic range and detail in a track. More and more, mixing engineers are being pressured to make the music as loud as possible.

Compression is just another tool, and while it’s certainly useful, overusing this technique can crush your stuff to the point of destruction – audible distortion occurs.

Not everything needs compression, and it’s much more useful to attempt to solve, say, bringing the snap of a snare or the boom of a kick drum out through using EQ if it’s possible.

Some light compression is definitely favorable in a good mix, something to catch peaking transients and level out any major level variances. But err on the side of caution so everybody can still hear the good stuff in your mix!

2. Forgetting to Use Your Eyes

While using your ears will be your primary tool for creating a killer mix, it simply isn’t enough to use your ears alone to determine the balance of a mix. Many EQ’s have built-in spectral analysis – use it.

Don’t have one? You can download a free version here.

Don’t have a clue what you’re supposed to be looking for? This is where things get a little nerdy. Leaving out all the math involved, there’s a graph called the Fletcher Munson curve that illustrates how sound is perceived by the human ear over the frequency spectrum.

Basically, the curve demonstrates that our ears hear mid-range frequencies easier than high or low frequencies. The highs and lows need greater energy to be perceived as loud as the mids.

What does this mean? Your mix should look somewhat inverse to a Fletcher Munson curve: A nice healthy low frequency range, with a slight roll-off at about 80hZ, a nice dip in the mid-range, and a slight boost in the highs for clarity; rolling off at about 16kHz.

3. Getting Too Heavy in the Mids

This ties in to what’s discussed earlier, and this is probably the most prevalent mixing mistake made by beginners. Too much focus on the mids creates a swampy, honky sounding mix.

There’s no clarity in the music when this happens and everything becomes a muddy blur. Be very careful with treating this range with any boosts – most likely you will be attenuating these areas.

The human voice is heavily focused in the mid-range. If you have a vocal track in the mix – allow this element to claim that frequency space. Attenuate the mids out of other elements to allow the vocal to shine through.

It’s important to perceive your mix from as many angles as possible, but mixing each track individually and on solo is completely pointless. How your guitar sounds in isolation is barely a reflection of how it’s going to sound against all the other elements. 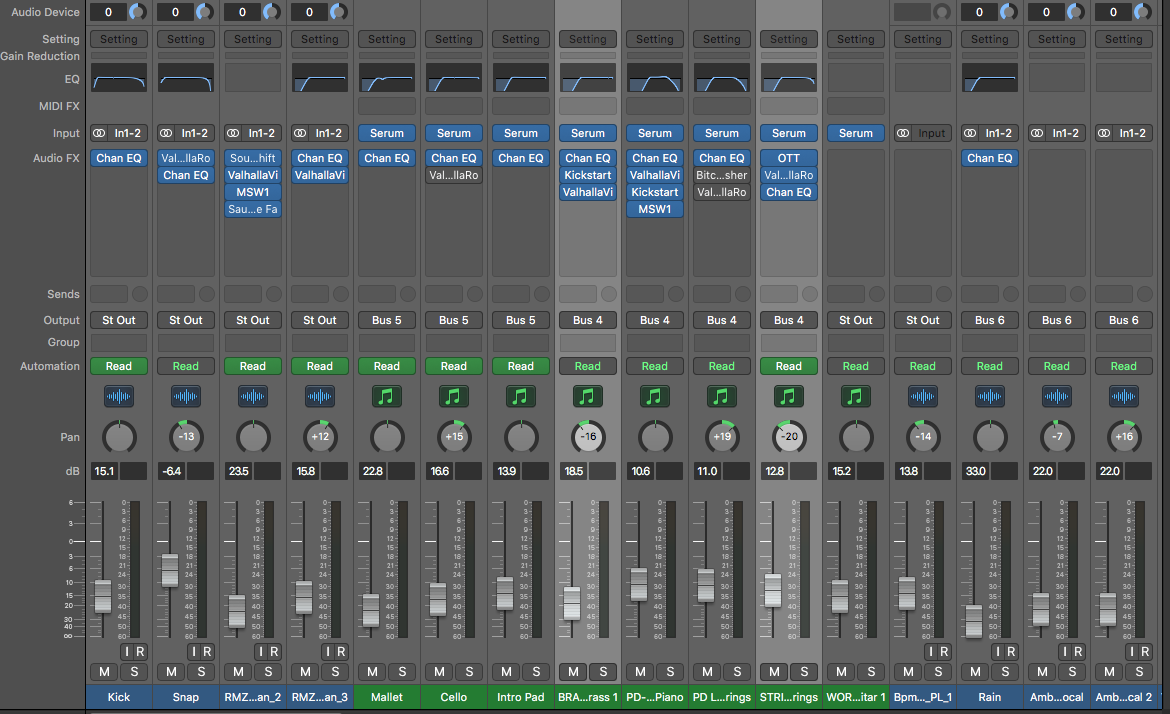 You must focus your mixes and understand them in context with your whole arrangement – this is the idea behind creating a great mix!

A great technique is to start with the most potentially problematic elements – tackle the hard stuff first. Drums and bass are by far your most challenging elements in a mix. Once you cross that bridge, you can focus on synth, guitars, and other simpler elements.

Of course, you may need to revisit things you once thought were already complete – that’s the beauty of mixing. Think of it as a sculpture. Once you start refining and sculpting, you unmask another part that needs to be chiseled away at.

5. Just Using One Set of Speakers

Of course, it is important that you use great nearfield monitors with a flat frequency response that doesn’t color or inflate the frequency spectrum in any way.

It’s widely believed within the audio community to steer clear of mixing exclusively on headphones (or cans, as they’re referred to). However, a great pair of semi-open headphones should do the job nicely.

What will the majority of your listeners be using to enjoy your music? If you guessed cheap in-earphones, then, you’re right.

It’s important to test your mix out in a variety of mediums – as many as possible. You will discover holes in your mix that you weren’t able to perceive before.

This means using speakers, earphones, headphones; even testing the mix out in your car. Doing this will reveal so much to you about playback devices and their influences on the frequency spectrum.

You may be overwhelmed and confused about which filter types are most suitable when performing EQ. Narrow and deep bell curves are fantastic for attenuation, particularly for precision work. Wide and subtle bell curves are great for boosts.

Shelving filters are great for a subtle wide attenuation of high and low ranges. For a more drastic effect, using a high or low cut filter will give you the roll-off you need.

There are no hard and fast rules with mixing – while this serves as a great guide, it doesn’t cover every situation and you may find that something completely drastic and seemingly extreme has immeasurably improved your mix.

Use your ears, and more importantly: learn to trust them.

Mixing is all about creating space for each element to cut through and obtain presence, rather than each track in the mix fighting to be heard.

Just remember: it’s not about the destination. Through learning and practicing your skills in mixing, you will quickly learn that the learning never stops. It will teach you an important lesson that is fundamental to life – it’s about the journey.

About the Author: Glen Parry is a veteran producer. He’s done everything the hard way so you don’t have to. You can find more musical advice and audio gear buying guides over at Audio Mastered.