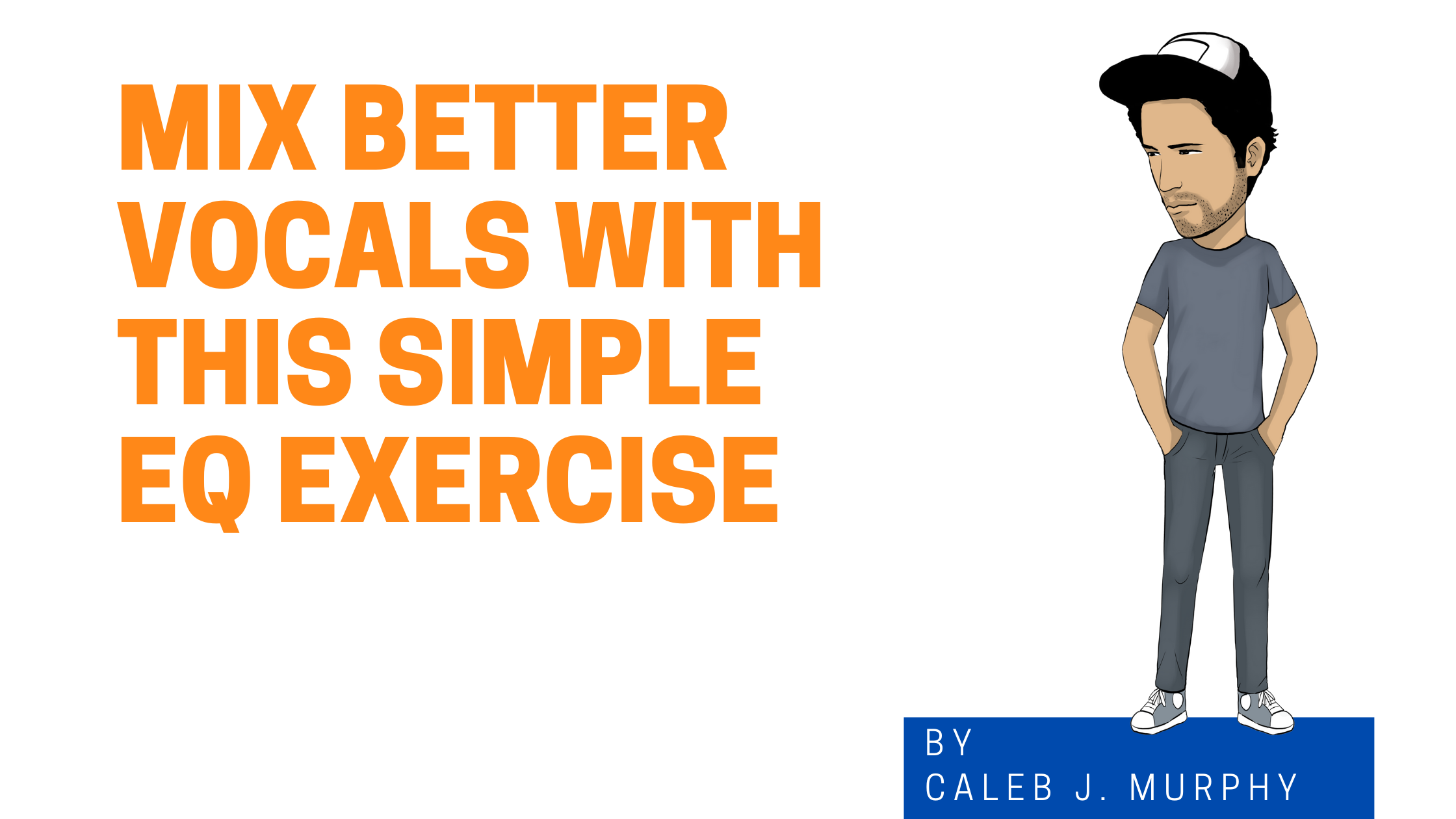 Vocals are the key to a professional recording.

Your music might be top-notch. But if your vocals are too bassy, too harsh, or aren’t sitting in the mix properly, it will ruin the whole song.

Fortunately, there’s a simple EQ exercise that can help you mix better vocals.

What is this mixing exercise?

This is a mixing exercise that illustrates the compromises mixing involves. It shows you the push and pull of this art form.

If you cut a certain frequency spectrum in your vocal, it will accentuate another. Mixing is all about balance.

This exercise uses just a 3-band EQ and a fader. That’s it.

To be clear, it’s an exercise, not a technique that can replace your current way of mixing vocals.

You could use this exercise as a starting point for a more in-depth EQing approach. But it’s not a replacement.

Really, it’s meant to train your ears to hear how changing one frequency will affect other frequencies.

(Thanks to The House Of Kush for showing me this).

Why you need this exercise

Many new mixers will make so many EQ edits to their vocals that it ruins the original, wonderful tone of the sound.

This exercise will re-train your brain to stop mangling your vocal EQ. It simplifies mixing by teaching you the fundamentals of mixing vocals.

Because here’s the thing — mixing is simpler than you think in some ways. It’s not easy, but sometimes people can complicate it too much.

This mixing exercise can help you connect the vocal recording to the feel of the music. It can help you use less EQ, which — more often than not — is a good thing.

How to use this mixing exercise

When we think of mixing tools, EQ is probably the first one that comes to mind. And, yes, it’s important. But there’s one tool more important…

Turning up the fader will make the vocals sound louder, obviously. But they’ll also sound fuller because it will bring out the low-mids in the mix. You’ll perceive more warmth in the vocals.

It’s usually one of two things:

But this exercise can help teach you how to hear this — and fix it.

To start practicing with this method, pull up a 3-band EQ. Put the bands at these positions:

These positions will allow you to affect the general lows, mids, and highs.

Here’s how to get started…

Put your vocals into your project. Use just the faders to make it sit in the mix. Do the best you can.

If your vocals are too bright or harsh, bring the fader up while pulling the 10kHz band down. If you make drastic moves, you’ll hear how the brightness level will come down and you’ll perceive more low-mids.

On the other hand, if your vocal is too dark or bassy, bring the fader up while you pull the 100Hz band down. Again, make this move extreme and you’ll notice more mid-highs popping through.

Increasing the 10kHz band will make you perceive the 100kHz frequencies less, and vice versa.

Now, bring all the bands back to zero. Let’s look at the 1kHz band.

Increase the 1kHz band and listen to how the vocals’ placement in the mix changes. The vocals sound like they’re coming out at you.

Now bring the fader down — you’ll notice the change in tone. You’ll hear more clarity without it getting too harsh. If you keep going, the vocals will start to sound strange.

Then do the opposite. Pull the 1kHz band down as you bring up the fader. You may notice the lows and the treble are more prevalent in the mix. The vocals will sit within the mix.

But if you take these parameters too far, you’ll end up with hollow vocals.

The reason the 1kHz band will have such a dramatic effect — whether you pull it up or down — is because that’s where the human voice talks. Our brains are most perceptive to mid-range sounds because our voices are typically in that range.

Treble and lows can make the vocal sound more intimate, but too much can be overwhelming.

The fader is the most important EQ tool you have.

More 1kHz can bring the vocal forward or make it sit in the mix more.

And increasing the 10kHz can brighten up the vocal.

Use the fader in combination with your EQ. As the fader goes up, bring your EQ band down.

Practicing this method will really help your ears learn what frequency spectrums change the sound of your vocal.

Caleb J. Murphy is a songwriter and music producer based in Austin, Tx., and the founder of Musician With A Day Job, a blog that helps part-time musicians succeed.