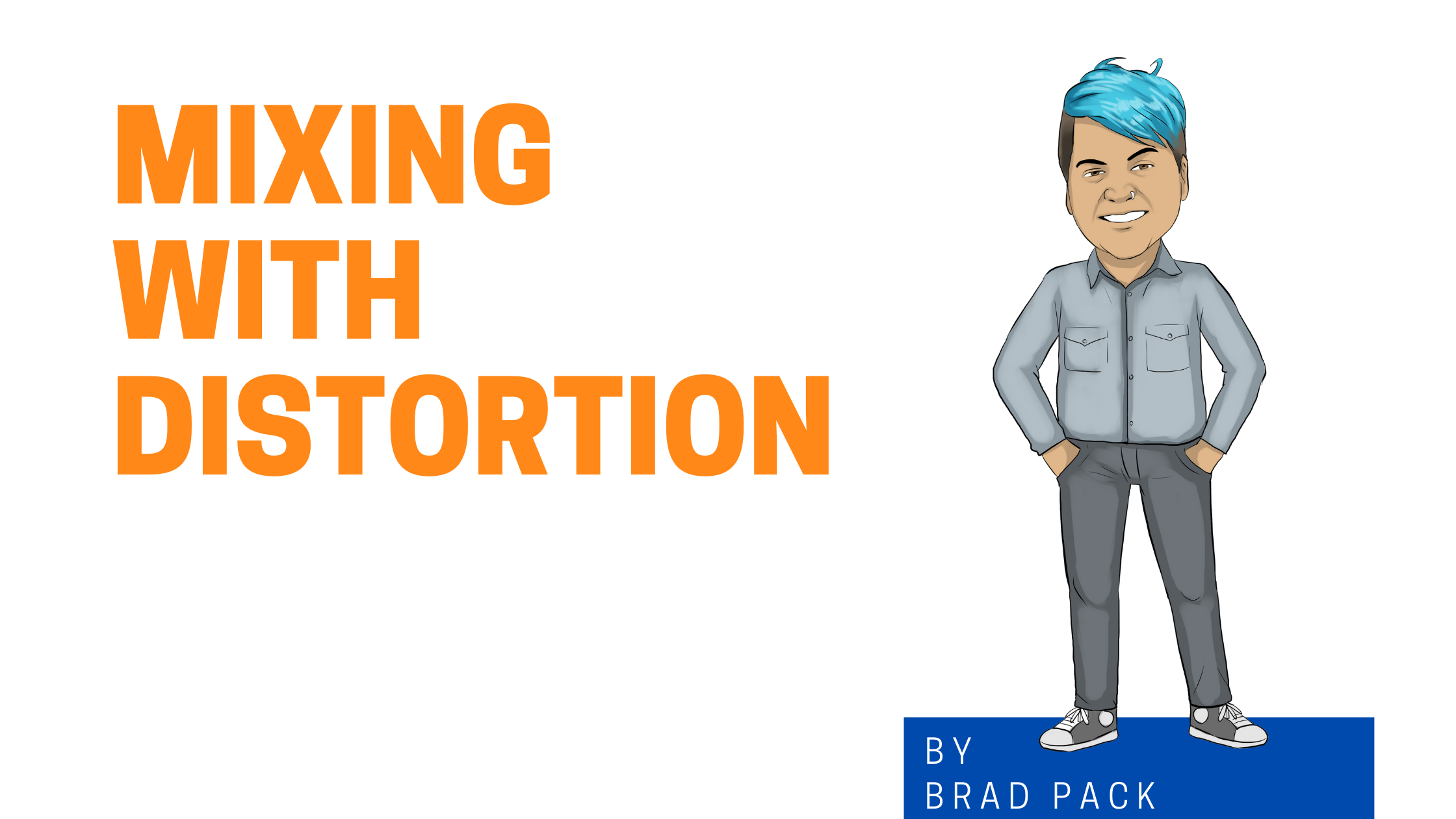 One of the most common mix tip suggestions is to use distortion to enhance your tracks. When used correctly, distortion is great for making tracks sound fatter, warmer, and generally more pleasing to listen to.

But it’s easy to overdo it when working with distortion, which can cause your tracks to sound harsh, shrill, and frankly, amateurish. In this blog, you’ll learn how to use different types of distortion to improve your mixes.

Technically speaking, distortion occurs whenever a piece of equipment alters an audio signal. Obviously, that’s pretty broad. In the studio, we use the term distortion to describe a wide range of effects—from subtle tube saturation to gritty overdrive effects and even equipment failure or malfunction.

Distortion occurs whenever a circuit is overloaded. The peaks of the waveform are squished or “clipped” when the system can no longer reproduce a high enough output level. As input levels continue to increase, the signal begins to break up, resulting in heavily distorted sound.

When the signal is squished, the circuit introduces overtones or harmonics, which add high-frequency information and make the track sound more exciting. Even-order harmonics are typically associated with tube distortion and give off a warm pleasant sound, while odd-order harmonics generally sound unpleasant.

While this type of sound is poplar in some genres, it can be a bit abrasive in most mixes, which is why it’s best to use small amounts of saturation.

Music production is often riddled with “happy accidents.” Small mistakes that lead to big ideas. How many times have you made a mistake while working in the studio and thought, “Actually, that sounds kind of cool…”

That’s what happened the first time someone intentionally used distortion in the studio.

Distortion isn’t exactly a new concept—it’s been around as long as recording technology itself. Although it wasn’t until the 1940s that engineers and producers started using it creatively.

Artists like Junior Barnard, Goree Carter, and the too-hot-for-radio Link Wray pushed the envelope with aggressive guitar tones that caused their tube amps to crunch and crackle. Ever since then, artists and engineers have been finding creative new ways to use distortion to help enhance their tracks.

Generally speaking, distortion is introduced by four sources; analog circuits, vacuum tubes, tape machines, and digital algorithms. As you may have realized, this covers pretty much any piece of gear in your studio.

Distortion can occur from almost any device—microphones, preamps, compressors, even your DAW. Let’s take a look at how different pieces of gear create distortion and how to harness that sound to enhance your mixes.

People often long for the sound of classic recordings—that’s why studios pay tens or even hundreds of thousands of dollars for vintage Neve or API consoles. There is an unmistakable sound quality to these classic transistor-based designs.

However, not everyone has the space or budget for a large-format console. Thankfully, you can still recreate the same sound using an analog preamp and summing mixer. In fact, Neve and API both offer 500-series preamps of their most iconic designs, making it easy to capture that signature sound in a compact, portable format.

With a pair of high-quality preamps, you can add harmonic saturation to any track you record. However, tracks often pass through another analog circuit during the mixing stage when they are summed to the group or stereo outputs.

Analog summing mixers make it easy to add warmth and depth to sterile digital tracks. Simply route the output of your DAW through the summing mixer and print the stereo file back into your session. For bonus points, use a discrete Class-A preamp!

Consoles aren’t the only analog circuits that produce saturation either. FET microphones like the Neumann U47 FET and compressors like the 1176 are known for their gritty sound. Dedicated distortion units like the Thermionic Culture Vulture or Empirical Labs Distressor utilize multiple sources to emulate a wide range of distortion characteristics. You can even use guitar pedals to conjure up different forms of distortion like overdrive or fuzz.

Compared to transistor-based designs, vacuum tubes deliver higher levels of even-order harmonics, creating a rich, warm sound. Some of the oldest audio equipment utilized tube designs, from classic mics and preamps like the AKG C12 and Telefunken V76 to outboard gear like the Pultec EQP-1A equalizer and Fairchild 670 compressor.

Tube distortion is great for thickening up your mix. Unlike solid-state devices that clip suddenly, creating harsh tones, tube devices clip signals in a very smooth and linear fashion. This gives them a warmer, more full-bodied sound and makes them easier to control or “drive.”

Tape machines also give off a unique form of saturation. In addition, analog tape inherently compresses hot signals and rolls-off the high-end for a chunky, warm sound. And because tape machines are actual machines, they create random frequency variations as they jostle around, giving tracks a unique sense of depth.

During the “golden era” of analog recording, most tracks were recorded to 16 or 24-track tape machines using larger tape sizes—typically two-inch reels. Then, the tracks would be played back and mixed on an analog recording console. The final mix would be printed to a separate 1/2” two-track tape machine, which imparts a slightly different sound that polishes up the mix nicely.

Thankfully, you don’t have to break the bank buying a studio’s worth of analog equipment to add distortion to your tracks. In addition to digital emulations of just about every device listed above, there are a variety of versatile distortion plug-ins that offer sounds analog equipment just can’t recreate.

Multi-band distortion plug-ins like FabFilter’s Saturn 2 enable you to create complex sounds with multiple types of distortion. With multi-band control, you can fatten up the lows with subtle tube saturation and add some bite to the highs with a trashy transistor sound.

Whether you drop a few grand on a vintage tube mic or pick up some new emulation plug-ins, keep these tips in mind to help you fatten up your mixes with distortion.