5 Ways to Prepare Your Band for the Recording Studio 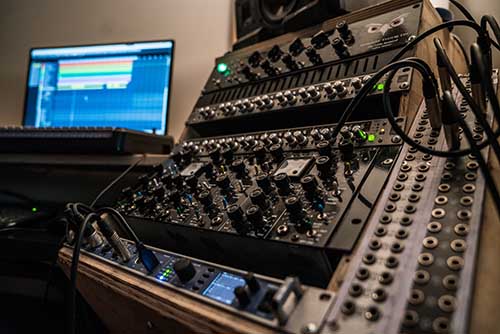 Getting into the studio to record your music is one of the most exciting parts of being a musician. However a combination of time pressure, high stakes and plenty of room for error can make preparing to record stressful for even the most experienced artists.

Having spent plenty of time in studios, both as a session player and member of a band, I’ve had lots go wrong and have learned the hard way how to prepare for recording.

The Importance of Pre-Production

I firmly believe that simply practising songs together as a band in a rehearsal room isn’t enough to fully prepare for recording. Instead, bands should do full pre-production demo recordings of everything they plan on doing in the studio.

Audio interfaces and DAWs are cheaper and more accessible than ever, which means that anyone with a half decent computer has access to the tools they need to make home demos of tracks before they enter the studio for real.

Recording puts every aspect of your playing under the microscope in a way that playing live simply doesn’t, so while the odd fluffed note or poorly played passage will largely go unnoticed in a loud rehearsal room, recording will expose it.

Pre-prod demos will highlight parts that you can’t play solidly, and therefore need practise, as well as giving you a clear recording so you can ensure everything fits well musically. I’ve lost count of the number of times bands have come into the studio with out of key bass or guitar parts that “sounded fine” when played loud in the practise room.

As well as this, recording affects most musicians psychologically – the added pressure of getting the take right can make everything much harder to play. Pre-prod demos are a great way to get everyone in the band comfortable with recording.

Pre-production demos are also great for giving you some ideas on production for the real thing. Unlike in the studio, you have no time limit, so can experiment with different sounds and timbres as much as you want.

Perhaps most importantly, this process gives you a time frame for each instrument and song. This means that you can plan out tracking accordingly and not unexpectedly run out of time.

Time seems to move differently when you’re recording, and it’s easy for hours to just slip by unnoticed, resulting in rushed production down the line.

For this reason it is always a good idea to create a spreadsheet with a full index of all the songs and instruments/parts. This index should be prioritised, so that the essentials are recorded first.

It’s also crucial that, if recording to a click, you map out the BPMs of all the songs and create custom tempo maps and click tracks for any songs with tempo changes before you get to the studio.

In your schedule, allow ample time for finding tones and sounds as well as mic’ing up instruments. This can take longer than anticipated and is often a reason sessions run over time.

It’s also a good idea to plan recording and schedule around each band member’s limitations. For example, don’t leave all the vocals until the last day, as the singer’s voice will deteriorate. Instead, scatter vocal sessions over multiple days to give their voice time to recover.

Research the Studio and Producer Before Booking

Take the time to listen to a lot of the producer’s previous work to make sure that they’ll understand and be able to nail the sound you’re going for.

As well as this, research what equipment the studio has. This goes beyond just looking at their amps and backline – check up on the compressors and rack units they have as well as the microphones and mixing desk to make sure the studio has quality equipment.

It’s also a good idea to look at the size of the live rooms to make sure it’s fit for purpose. If you’re a band who likes to record live, you need to make sure the studio has enough booths and sound proofing equipment to do this well.

I also think it’s a good idea to meet or at least call the producer beforehand to make sure your personalities are compatible. Recording can be an intense, stressful experience and emotions can run high, so it’s important to find a producer you feel comfortable with.

Involve the Producer Early On

While lower budget producers will almost certainly not have time to be very involved before you enter the studio, it’s always a good idea to give them some context of what you’ll be doing beforehand.

It is most crucial to let them know exactly what gear you plan on bringing and what studio gear you plan on using. Equipment breaks all the time in busy studios, by checking beforehand you’ll have time to hire any essentials before the session if anything isn’t available.

It’s also a good idea to send the producer the tempo maps, click tracks and even the individual stems from the demos. With this, they can create DAW workbooks with guide tracks ready to go, instead of wasting time transferring files around.

Service Your Equipment Well in Advance

The whole point of recording is to capture the best possible performance of your music. To achieve this you need to make sure that your equipment and instruments sound their best.

While you might be using a studio’s backline and amps, it’s usually a good idea to track on instruments that you are familiar and comfortable with, so make sure that they are studio ready.

If you will be using your own amps, get them serviced before recording.

A staggering amount of bands skimp out on this, but it is essential, as no amount of studio magic is going to make a bass with bad intonation sound good!

Scott Masson is a multi-instrumentalist and session player with over 7 years experience as a recording and touring musician.

He has recorded with a range of artists, from session work on major label releases recorded in some of London’s most prestigious studios to DIY recordings done on a shoe string budget.