How To Record Electric Guitars The Easy Way 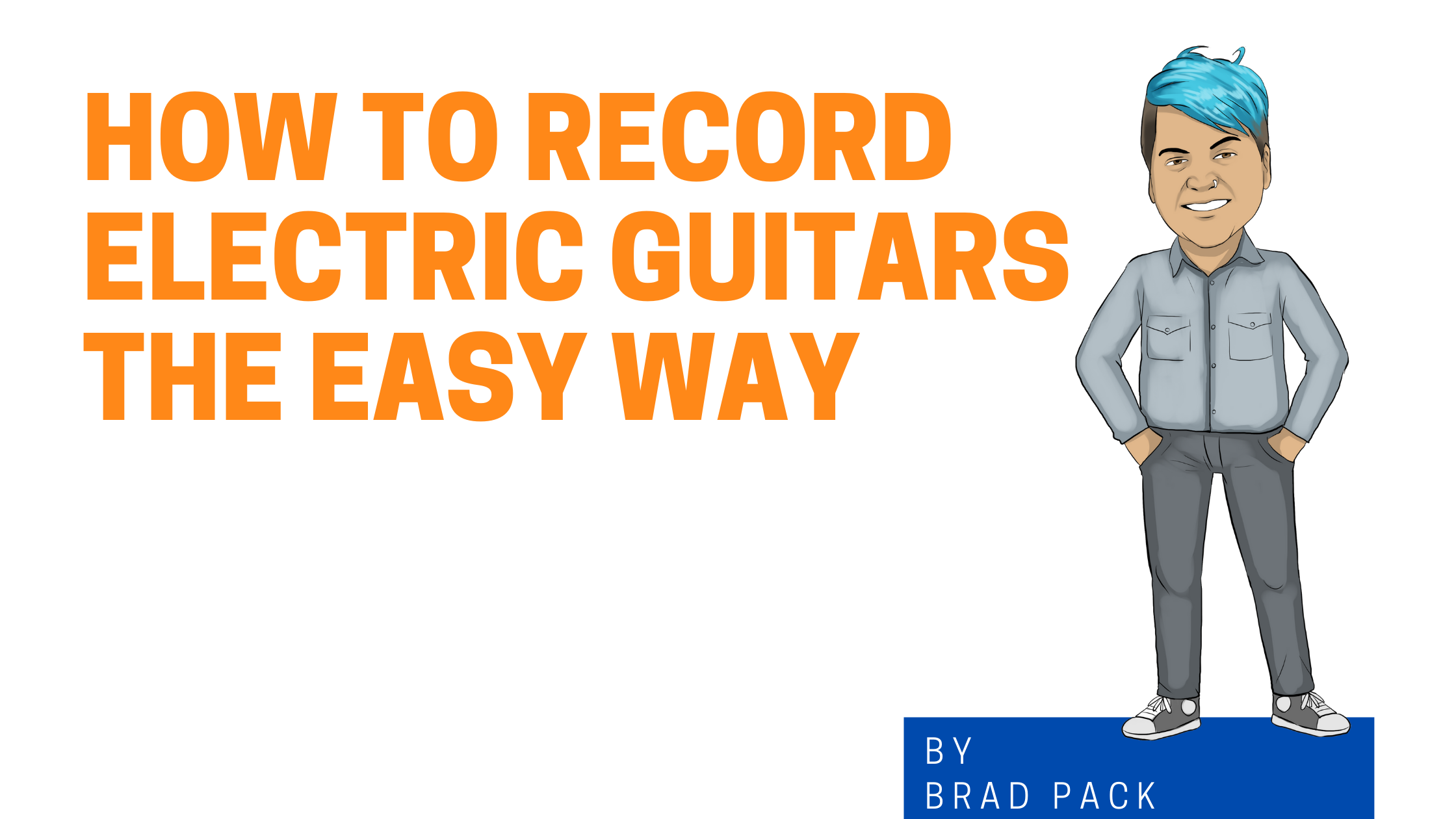 If you want to record electric guitars without feeling like the end result sounds like a muddy mess, then you’ve come to the right place.

Nothing ruins a rock song quicker than weak, wimpy guitars. You want massive, powerful, roaring guitars that knock the listener off their feet!

Over the years, countless engineers have concocted complicated techniques for recording electric guitars. But, the process is actually much simpler than you might imagine.

Read on to learn everything you need to know to start producing professional-sounding guitar tracks.

The most important part of the process is the very first step. It’s important to get the tone right at the source. If it doesn’t sound good coming out of the amp, no vintage microphone or analog outboard gear will make it sound any better.

Experiment with different guitars, amps, and settings until you dial in a good starting point. Make sure you and the guitarist are both happy with the tone before moving on.

While you should strive to get as close to the finished guitar tone as possible during the recording session, that doesn’t mean you want to rule out other options.

Using a direct box or DI box to capture the isolated guitar signal from a performance allows you to process it using digital guitar amp simulators or even “re-amp” the signal later using different gear.

DI boxes convert unbalanced “hi-z” 1/4” instrument inputs into balanced “low-z” XLR signals, which you can record through your interface.

DI boxes also split the guitar signal into a second “thru” output, which can be connected to the amplifier so you can simultaneously send the signal to your amp and DAW.

Dynamic, condenser and ribbon microphones can be used to record electric guitars, but they each serve a different purpose.

Some guitarists like to turn it up LOUD. Something magical happens when an amp is turned up so far it starts to break up. If you’re recording a particularly loud guitar amp, use a dynamic mic. Dynamic mics are capable of recording extremely high sound pressure levels (SPL) without distorting the signal.

As long as you keep it to a reasonable level, condenser mics do an excellent job of capturing detail and clarity, which works well for clean, crunchy or downright distorted tones.

If you’re looking for a bit of color and vintage vibe, ribbon mics offer a unique guitar tone texture that can be perfect for some songs. Just remember to keep it down, as extremely loud signals can damage ribbon mics!

You may have heard of some engineers using multiple mics to record electric guitar.

While this is a conventional technique, it can quickly lead to phase problems and messy tones. So before you empty out the mic locker, start with a single mic and see what’s missing from your sound before you add another.

When it comes to mic placement, there are several things to consider.

Adjusting how close the mic is to the amp will change the amount “room sound” in your signal. Moving the mic towards the amp gives you more “amp sound” while moving the mic away from the amp lets in more “room sound.”

Some engineers like to place mics right up on the grill of the amp. Just remember, the closer you get to the amp, the more low end thanks to the proximity effect! Other engineers prefer to leave 3 – 6” of space for more “depth.”

Of course, different pickup patterns can also alter the amount of “room sound” in your guitar recordings. Cardioid patterns provide the tightest tone, while Omni mics offer a nice blend of both sounds.

[Editor’s note: Check out the sound examples in the video below to hear how the different mic placements affect the recorded sound]

How to Record Electric Guitars With Multiple Mics

Some engineers like record electric guitars with use multiple mics to create complex tones. A common technique is to mix and match different mic “colors.”

Most DAWs feature stock plug-ins with phase invert buttons, which you can use to quickly test your tracks. Your tracks should sound weak and thin after flipping the phase – if not, you may have phase issues.

Using multiple mics also allows you to create stereo recordings, which can be great for big, wide guitar tones. Don’t be afraid to experiment with a variety of microphones and placement techniques. Just make sure you don’t go overboard.

Follow these simple steps, and you’ll be well on your way to producing professional-sounding guitar tracks.

Brad Pack is an award-winning audio engineer and writer based in Chicago, IL. He currently owns and operates Punchy Kick, a professional mixing and mastering studio that specializes in pop-punk, emo, punk, grunge, and alternative music.

He has been helping artists connect with fans through emotionally resonant mixes, cohesive masters, and insightful guidance for over ten years. Check out his website PunchyKick.com or say hi on Instagram @PunchyKick