Why You Should Have A Portable Recording Setup 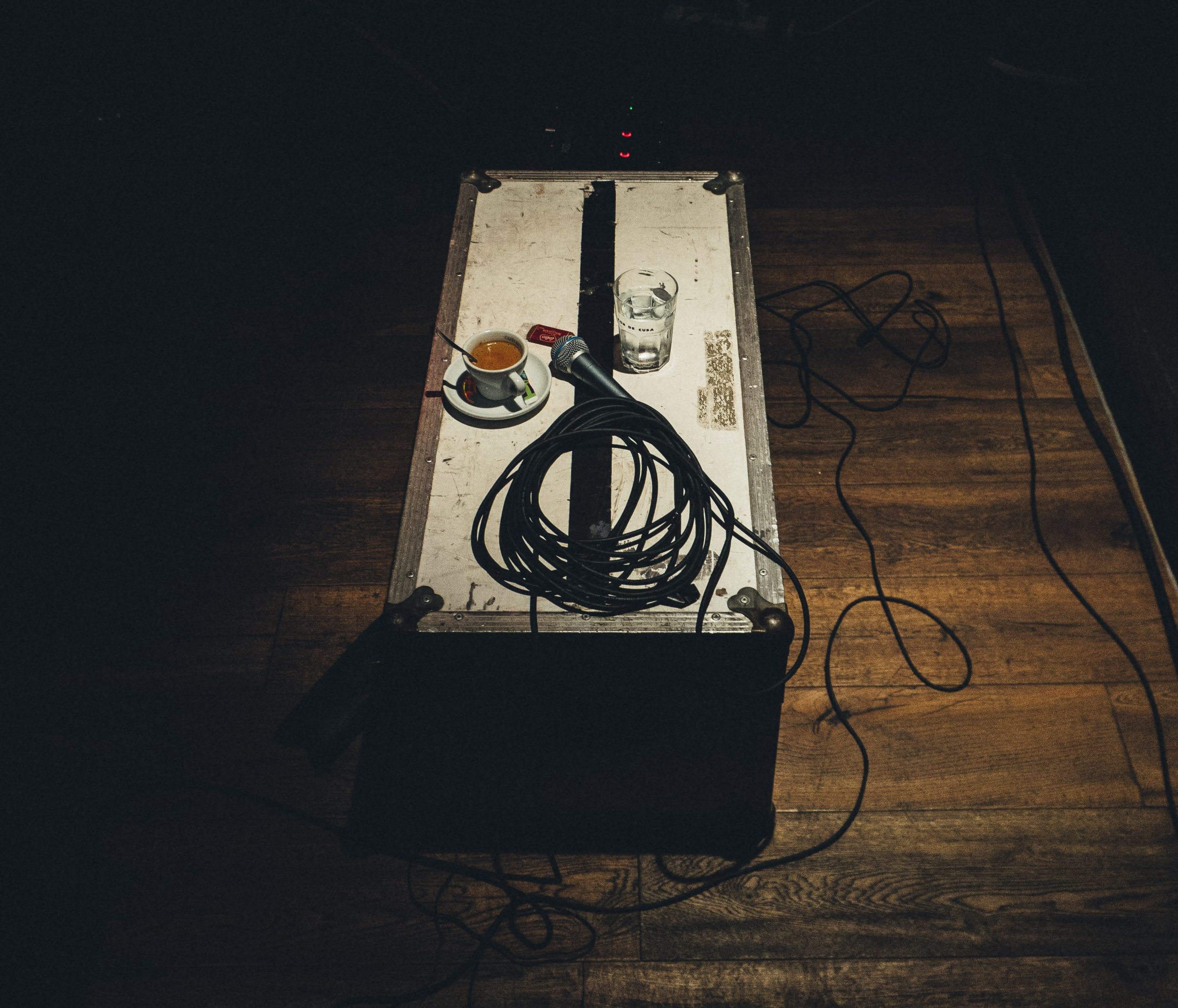 I recently did something I never thought I’d be able to do.

I recorded a baby grand piano for one of my songs.

I don’t own one. My friend does, and I got to record him playing some beautiful stuff for my track.

And I never would’ve been able to do that if I didn’t have a portable recording setup.

That’s why I think every musician who produces music should have the option to record anywhere.

Portable Recording Setup: What You Need

All of my recording equipment can fit into a small wooden crate.

Some people might be embarrassed by this. Not me.

That’s because I know the benefits of having a portable recording setup.

So here’s all the equipment you’ll need if you want to go portable.

I have a wooden crate that’s about 2’x 1’x 1’ and it’s plenty big enough to fit my equipment.

You don’t have to use a wooden crate, obviously, but a flimsy cardboard box will not do. A plastic storage container would work well.

It has to be something sturdy that will protect your precious recording equipment.

If you need an audio interface with a lot of inputs and outputs for your home studio, that’s fine.

But consider getting a smaller, two-input interface for recording places besides your home studio.

I use a Focusrite Scarlett 2i2, a USB interface. It has two inputs that accept either XLR or quarter-inch cables and left and right outputs on the back.

When I recorded my friend’s baby grand, I used an Audio-Technica AT2035 on the right side and an ElectroVoice ND257 on the left side.

And that’s all I needed — mixing the two channels together sounded great.

It’s a bad idea to just throw your microphones into the crate or bin or whatever you’re using to transport your equipment.

You have to treat mics like babies, even if they’re dynamic mics, which are typically more durable. It’s better to be cautious.

I use the cardboard box that my AT2035 came in because it has a custom-fitted styrofoam spot for the mic. Then I put my ND257 and my Realistic Radio Shack 33-1070c omnidirectional microphone in the other half of the box on top of some diffusion panel scraps.

So all of my mics are lying on softness inside a box.

Ideally, though, you’d want a real, protective carrying case for your microphones.

Mic stands that don’t collapse are a pain.

I used to own one that had a heavy metal base, an awkwardly bendable neck, and a body that could extend up and down. And that was it.

It was so annoying transporting that thing. It was clumsy and didn’t store well.

But I now have a mic stand that folds up to about two-feet long. And it easily fits into my wooden crate.

If you need to record music somewhere other than your studio, do yourself a favor and only use foldable mic stands.

It’s best not to assume the musician whom you’re recording will have studio headphones.

They probably do. But it’s smart to have an extra pair, just in case.

Preferably, these headphones should be closed-back, which means they cover the ears entirely. This ensures the least amount of sound escapes from the headphones, and they’re less likely to cause mic bleed.

I use the Sennheiser HD 280 PRO closed-back headphones, and I highly recommend them.

You also shouldn’t assume there will be a table or desk wherever you’re going. That’s why bringing a foldout table is smart.

This could be a card table or something smaller. Either way, it’s a good idea because you can easily place it wherever you need to.

The Benefits Of A Portable Recording Setup

Now let’s talk about why it’s a good idea to have a portable recording setup.

The main reason I love being able to easily move my recording equipment is so I can record literally any instrument.

A baby grand piano. A choir in a church. A small orchestra.

As long as there’s an outlet nearby, I can record anything.

This opens up your options exponentially. Now there’s no more “I wish I had access to a [whatever instrument].” With a portable setup, you can take your studio to the instrument.

Let’s say you have the chance to record a super talented musician, but they’re crunched for time. If you go to them, you’ll get more recording time because they won’t have to commute.

It’s more convenient for the musician. That means they’ll have a better experience. And they’ll be more likely to work with you again in the future.

Here’s another scenario. Maybe you ask a friend to play a part in your song, but you can’t afford to pay them. The least you can do is to make the process easier and more enjoyable for them.

If you can take your recording studio anywhere, that also opens you up to many more opportunities for income.

You can produce other artists even if they can’t come to your home studio. They may be more likely to work with you if you can go to them. If a rock band with a full drum set needs you to engineer their album, you can accommodate.

I hope you can see now why you should have a portable recording setup.