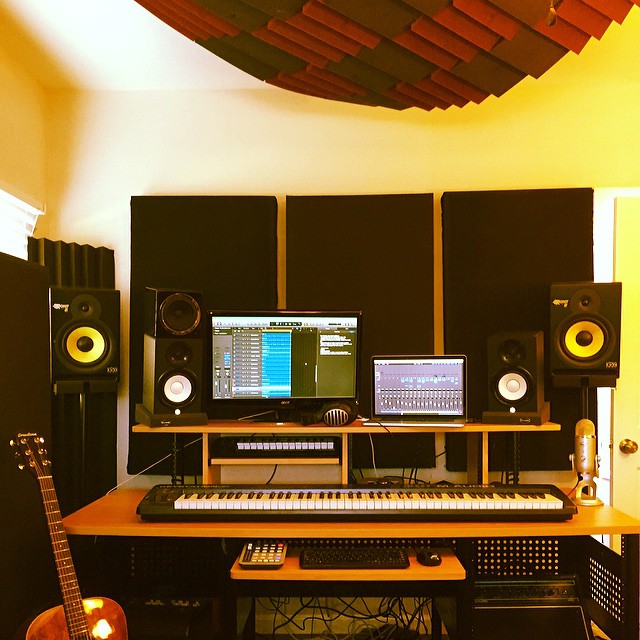 When you set up your home studio for the first time you probably wondered about what to do about acoustic treatment.

Acoustic treatment is kind of a cool aspect of recording but it can also be expensive and confusing.

You need enough of it to cover the areas you need, and it’s confusing because you’re not necessarily sure where those areas are.

I had the same problem so I decided to get some help from the guys over at Auralex.

And before you ask, no this isn’t going  to be a sales pitch for Auralex foam.

It’s something much better and free for you to use.

It’s their free Room Analysis where they analyze sketches of your room according to your specifications and tell you where you should place your acoustic treatment, whether it’s their products or your own DIY panels.

So I made a little sketch of my room using Photoshop and told them I wanted to create a room that was mostly a dead mixing area on one side of the room and a “livelier” recording side on the other.

This is what they sent me back: 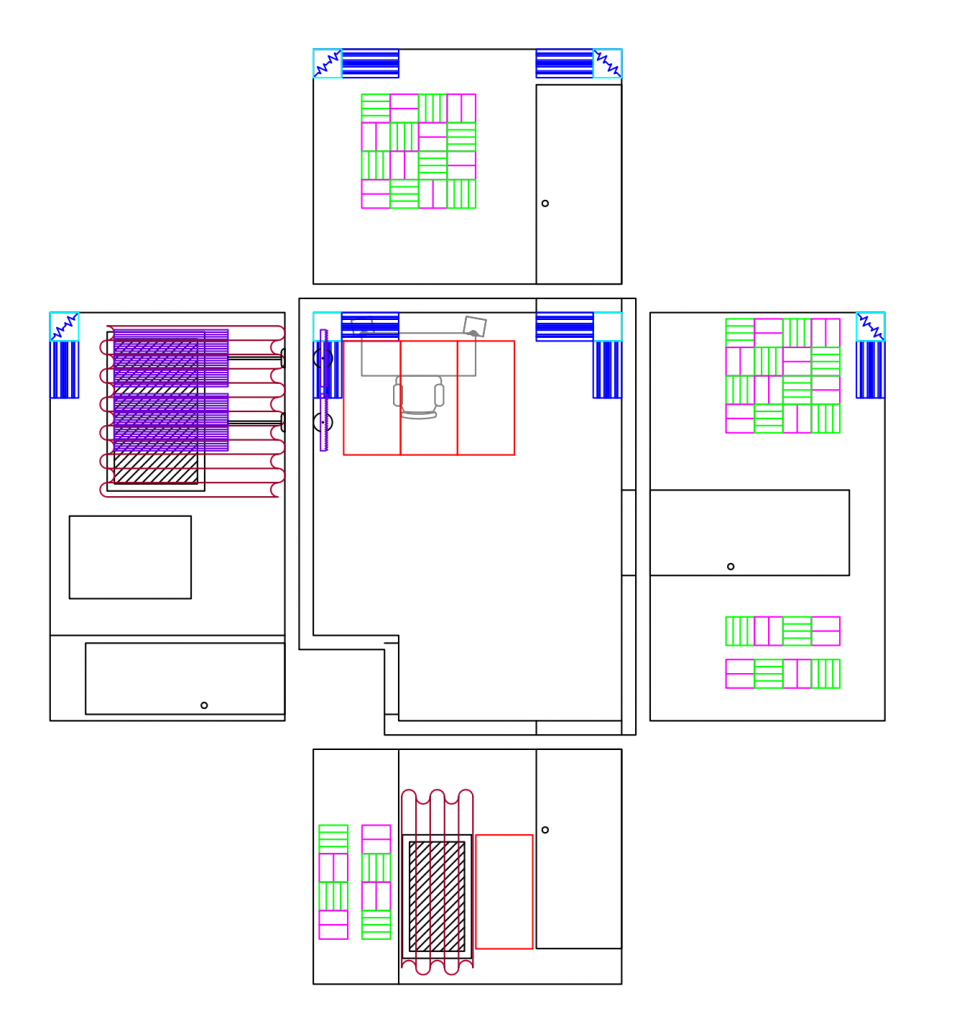 Auralex’s guys confirmed my suspicions on where to place my acoustic treatment. I also got a few new ideas on how I could improve their suggestions while making it cheaper for me as well.

Instead of placing my DIY panels on the ceiling as they suggested, I glued 16 of my 1′ x 1′ onto a 4′ x 4′ plywood board much lighter than my DIY panels so there was less chance of brain damage if it accidentally fell on me while I was mixing! 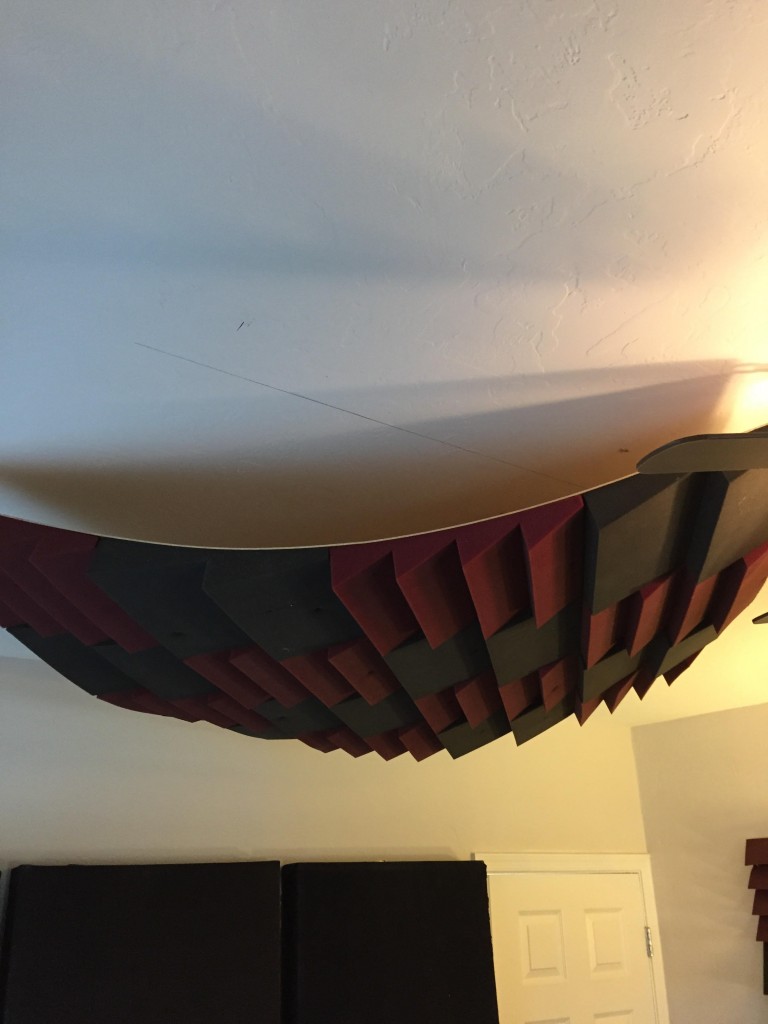 Instead of using the recommended 4 x 4 panel of Auralex foam on the front wall behind the monitors I opted to put three of my homemade absorbers there instead. These are simple 2 x 4 frames filled with Owens Corning Mineral Wool or Roxul that I bought in bulk a few years ago from ATS Acoustics.

You can see two of them below the ceiling cloud in the picture above.

My simple, $2 solution was a pair of doorstoppers that I screwed to the bottom of the panels. I hang them on the wall using picture frame hangers and the doorstoppers on the bottom create a nice variable air gap all the way down to the end of the panel.

Check it out in the picture below: 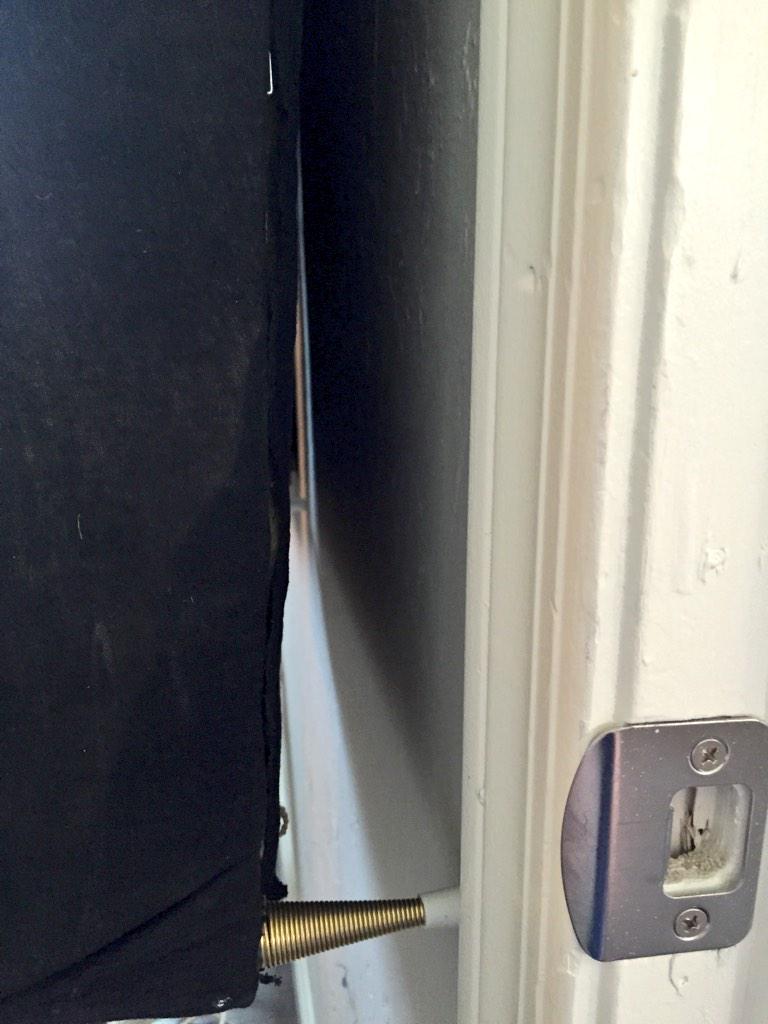 Pretty simple solution. Now I have added bass absorption in the front of my mixing position without spending more than a couple dollars!

The early reflections to my left and right were dealt with differently.

On my left I had a harder problem but luckily (and unfortunately for them), Auralex gave me a great solution.

Instead of buying their $300+ portable treatment, I simply used two microphone stands to hang my DIY treatment. 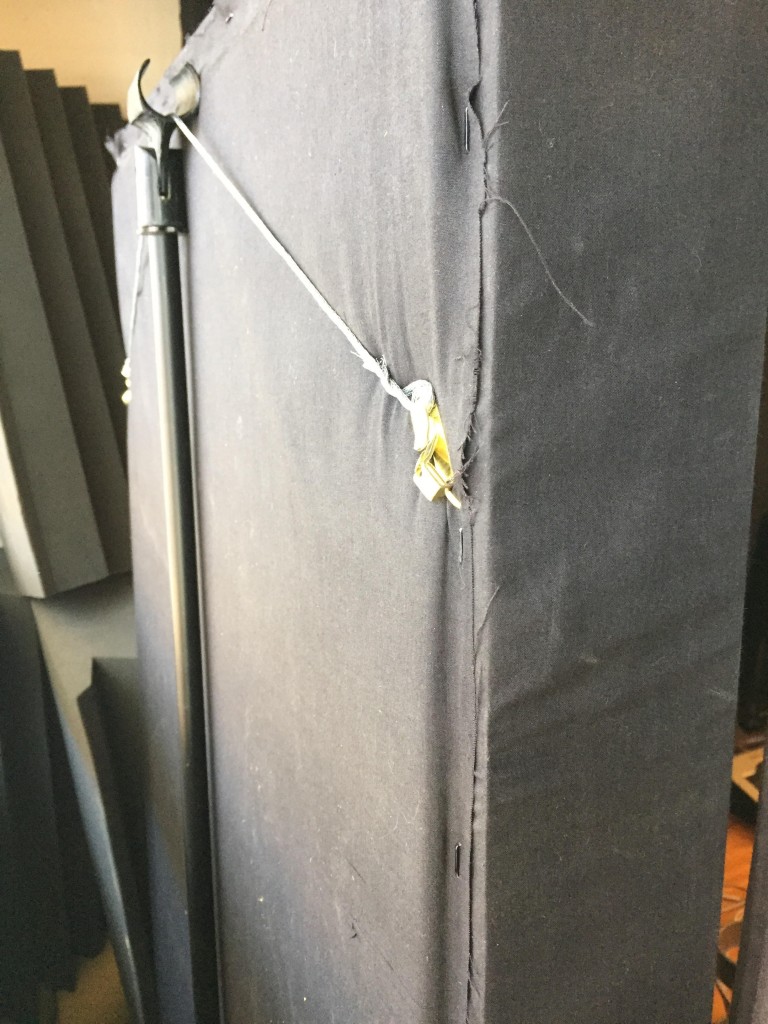 Sure, it might not be as fancy as their cool  they do an even better job of absorbing the low end.

Having the window to my left was actually a blessing in disguise. If there wouldn’t have been a window I would’ve just hung the panels on the wall and left them there.

Instead, I ended up with two portable panels I can use anywhere in the room when I’m recording. That flexibility will work wonders when I’m doing vocals or recording instruments that I need to be as dry as possible.

The big issue with my room is that all the corners either have doors or windows very close to them. That means that I’ll have a harder time trapping bass because I won’t be able to line every corner of the room from floor to ceiling.

I haven’t completely ironed out the solution but I think I’ll have to line the horizontal corners of my ceilings with bass traps instead of going the traditional floor to ceiling 45° route that you often see in studios.

Bass trapping is actually one of the more important aspects of controlling the sound in your studio so I definitely won’t be skimping on this down the line. For now I’ll have to do with what I’ve got, plus some strategic placement of the Auralex LENRDs I already have.

During my research into placement I also ran into this great article on bass trapping that I highly recommend, even if it does get a little technical.

The “live” part of the studio is still “under construction.” I’m waiting on thick curtains for both of the windows and then I’ll place the rest of the acoustic treatment I have left around the live area to reduce the flutter echo and control reflections.

But the control room/mixing/production station is looking pretty good already!

My gear now consists of:

Along with assorted guitars, amps and microphones my setup really has everything I need to get creative in the studio.

Let me know what you’re working with in the comments below!

If you liked this article, help me to let others know by sharing this article on Facebook or Twitter.