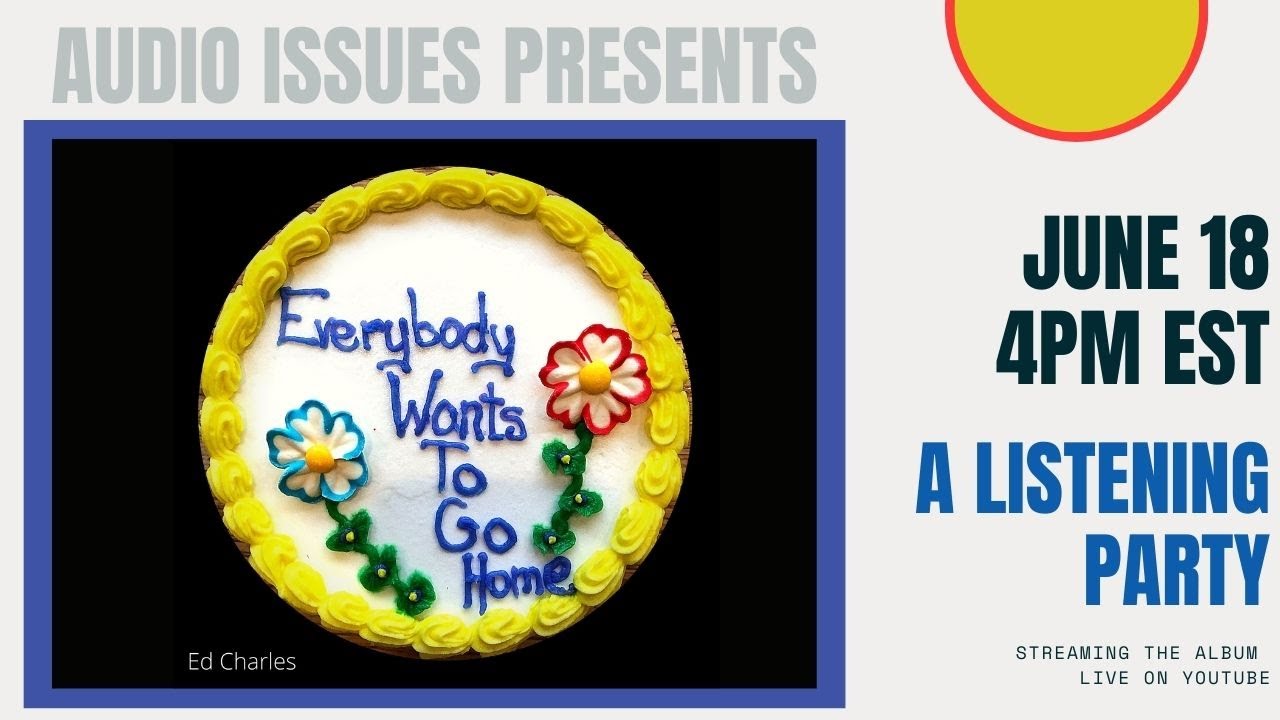 Join us for a fun listening party this Friday, June 18th at 1 PM PDT where we’ll listen to an Audio Issues student album all the way through while discussing the production in the chat.

Come join us live and ask any questions about the songs and how they were made as you’re listening to them in real time while chatting with its creators, Audio Issues mentor and coach, Ed “Charles” Elefterion.

Everybody Wants to Go Home

A Note About the Album From Ed

This album was recorded in what a friend dubbed as “Ed’s Red Shed.” (It makes a cameo in the video.) If you’re a member of Audio Issues’ Insiders program, you’ve seen me sitting in it during our Feedback Friday sessions. If you’re not a member, and you make music: join. Great community of people who make great music.

This is probably supposed to be short but…I figure, if you’re interested, you’ll keep reading.

The songs on the record date from 2019 to just a couple of months ago. Björgvin has been urging me to release them as singles, and with many of them, I did just that. But I’m a storyteller and I see things as parts of a whole. This album is a larger story than any single could tell.

It seems like I did all of this by myself, but I’ve got a few people to thank who gave me support and helped bolster my confidence over the past few years:

Nic Hamilton’s listened to this album in one form or another more than once, always with support and kindness. The idea of him on his tractor with my music in his earbuds always makes me smile.

And Simon Rider, of course. When he and I aren’t making other music as Splitting Stations he’s listening to my music while repairing bikes…and he gives great feedback. Bob Ellis is a mastering engineer in the UK. (Gosh, so far all of these guys live in England.) Over the last couple of years, Bob and I have gotten into the habit of giving feedback to each other and my work is all the better for it. The whole crew of Audio Issues Insiders help keep me focused and have given me a place to test my ideas. And they’re just such a fun group of people to listen to music with every other Friday. I’m glad they’re in my life.

They wouldn’t be in my life if Björgvin didn’t create Audio Issues and give us all a reason to come together. He’s one of the few entrepreneurs I actually like. Why? (And I think I told him this during our first face-to-face Zoom…) He’s more interested in people and their growth than he probably should be. He’s a great guy who actually cares about the people around him – not just his beautiful growing family, but his students and members of his site. He’s always looking for ways to help them. And first in his mind is always the idea of personal improvement. His, yours, mine, everyone I’ve ever seen him work with. He’s more than a guy who runs a company or two. He’s an example of how to do good in the world. He’s in it with you. And I’m glad that we’ve become friends. And I’m glad he likes this album. (Because he’s heard a lot of music in his life and he knows a thing or two.) And…I admit it, I’m glad he made me make this little movie to accompany it.

And…my wife, Jessica. She’s dynamite. A superb visual artist, yes, but she’s just the best person in probably the whole wide world. Check out her art here: jessicabaker.net. (But, man…that’s just the tip of the iceberg.)

Thanks for reading. Get in touch if you like: ed@relieftone.com