Is Your Mix Making You Crazy?

There was a knock in the walls and it was driving me crazy.

I went outside, maybe it was some construction. No luck. Just the sound of birds and the faint traffic noise coming from Broadway.

Back in the studio, I listened intently and it seemed like it was coming from behind my acoustic panels behind my mixing desk.

I felt like Walter White in Breaking Bad where he spends an entire episode trying to kill a fly in his meth lab. That, or I was going crazy like the narrator in the Telltale Heart by Edgar Allan Poe.

Surely it wasn’t my sanity? I wasn’t cooking meth and I hadn’t buried a body inside my studio walls so it had to be real.

There it was again!

I wandered into the room behind my studio. I stared at the washer and dryer like they were evil twins plotting my demise.

I was the solitary player of the Hot and Cold Game and I was getting warmer.

There! The pipes vibrated. “It’s coming from the pipes!” I screamed at nobody in particular.

I found the problem, but how would I fix it? Handy is not in my skill-set. The only callouses I have are on the fingertips of my left hand from fretting guitar strings.

A quick Google search later found the problem to be a water hammer. Although it was a brand new phenomenon to me, the plumbers on the internet had plenty to say about fixing it.

Basically, it was like a routing or a gain-staging problem. All I had to do was fix the flow of water by draining my pipes and my sanity was restored.

I bet you’ve found yourself helplessly searching for why your mix doesn’t sound the way it does in your head. And maybe it’s even making you crazy!

Luckily, my Step By Step Mixing book lays it all out for you and teaches you how to keep your sanity intact while you’re making your songs sound like the way you hear them in your head.

It has 281 ratings on Amazon, giving it an average of 4.6 stars with thousands of happy readers. 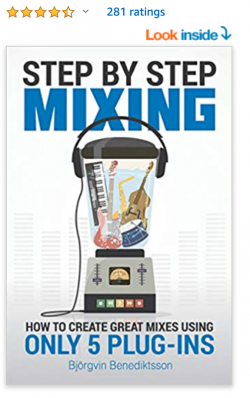 Won’t you give it a read and tell me what you think?

Here’s where you can get the paperback or Kindle version straight from Amazon.

And if you want the PDF book bundle with Better Mixes in Less Time through my site, here’s where you do that.