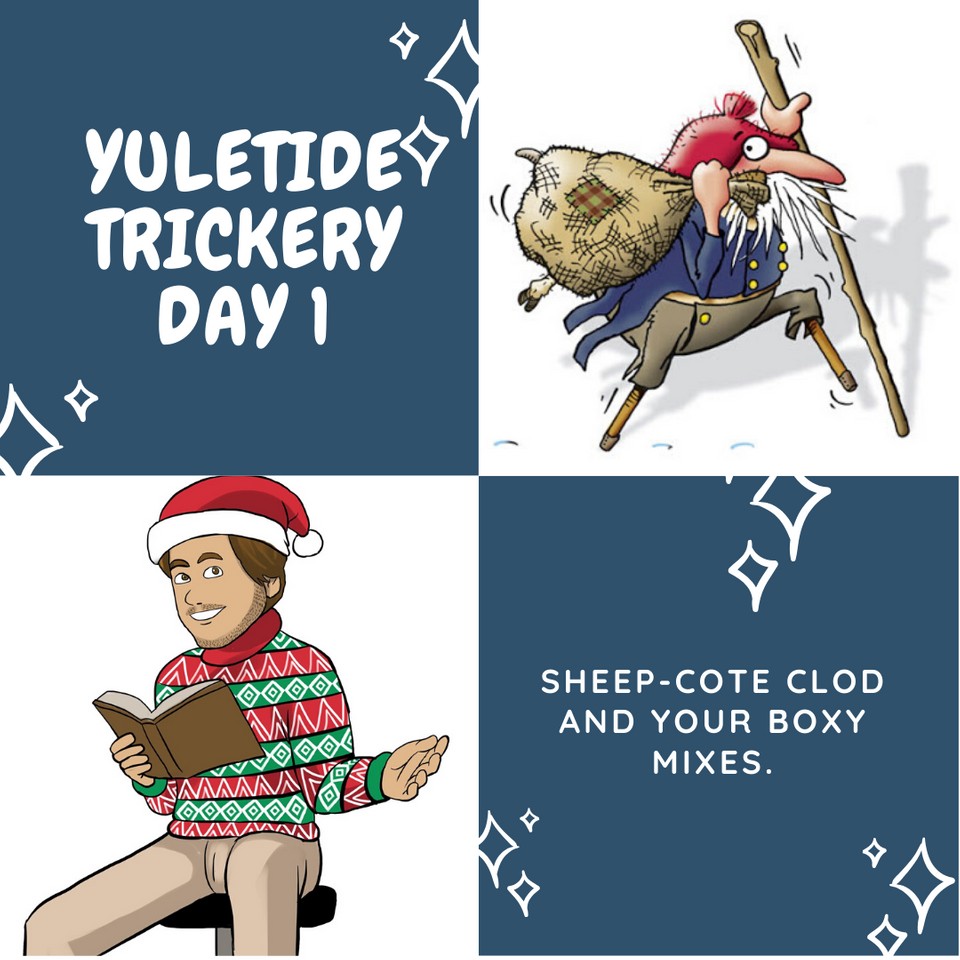 Welcome to Day 1 of our Yuletide Trickery series.

As you fall fast asleep to your thoughts of improving your drum sound, you’re blissfully unaware of the treachery that’s about to befall you.

The first Yule Lad to wreak havoc on your home studio is Stekkjarstaur or Sheep-Cote Clod. Stekkjarstaur used to have a fondness for harassing sheep and used their wool to mask the sound from his stiff peg-legs. This time around he lost one of his peg legs while scaling down the mountain.

Luckily for him, you had just thrown away a worn-out mic stand. It was one of those budget stands that would never stay tight enough. You had finally thrown it out after it wouldn’t stop drooping throughout your last vocal recording session.

Stekkjarstaur finds the abandoned mic stand outside your studio and screws it onto his missing leg. He hops onto your roof and surveys the area, hobbling on his peg legs. His footsteps make a continuous clunk on your roof, the sound causing the drum sound in your dreams to turn from powerful and tight to boxy and bright.

You jolt awake, but Stekkjarstaur and his peg-legged pounding have gone.

These tricksters aren’t in a giving mood this Yuletide, but that’s why am I here, dear reader. If boxiness is bothering your drum sound, then let me soothe your soul and leave you with this free excerpt from EQ Strategies – Your Ultimate Guide to EQ about reducing boxiness in your mixes:

“Boxiness can be reeled in by cutting in the mids around 300 – 400 Hz and sometimes in the 600 Hz region. You can do this with either two narrow cuts or one big one. Sometimes it depends on the genre which method works better. Use a parametric EQ with a narrow bell curve and boost the middle frequencies. Sweep through the spectrum starting at around 300 Hz and going up to 600 Hz. Somewhere along the way, there’ll be a spot where the cardboard sound jumps out prominently. Set your EQ setting to KILL and cut that certain frequency until you’ve effectively eliminated that dreaded boxy sound.”

Although Stekkjarstaur won’t be helping your music any time soon, there’s one bearded, Santa-looking fellow who will.

Luckily for you, he doesn’t have anything to do with the Icelandic Yule lads, but he has produced two Icelandic bands: Of Monsters and Men and KALEO.

He’s three-time Grammy-award-winning producer Jacquire King, and his course on record-making is one of the best courses on music production I’ve taken.

His insights into recording, producing, arranging and mixing have completely changed my thoughts process when it comes to thinking about what constitutes a contemporary record, and he’s sharing it all with you in his course, Recording Making with Jacquire King.

The price of the course goes up tomorrow, so if you want to go into the new year with an all-new approach on making quality, professional records that stand up to the productions you hear on the radio, click here to get started.