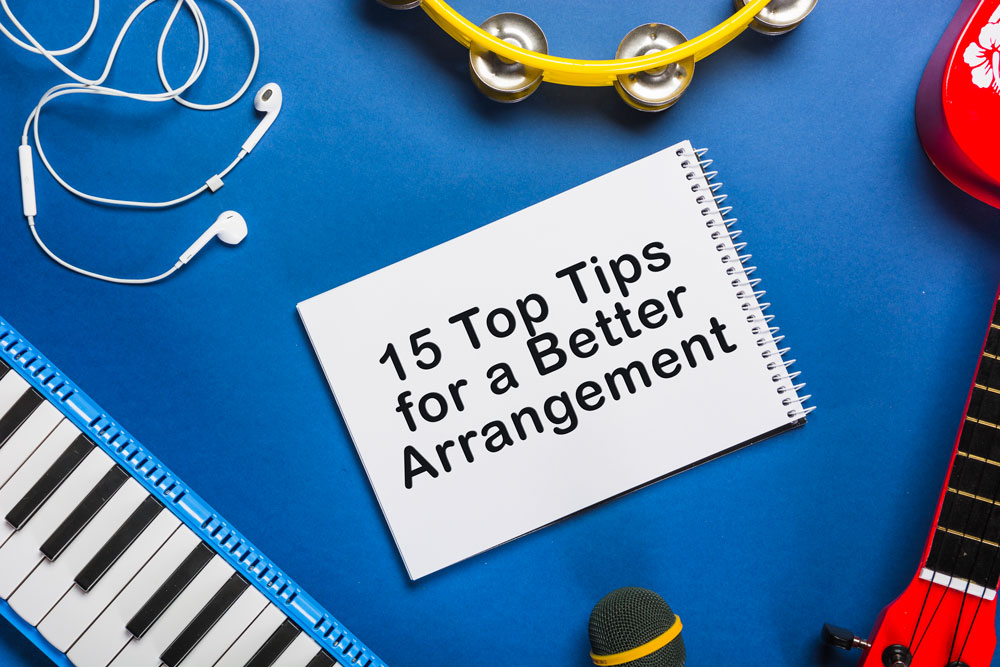 The arrangement is probably the most critical element of any piece of music ever created. It is the process of transforming individual musical components into one complete, smooth-sounding track, but it is always the last hurdle where a lot of artists fall flat, making excuses and avoiding it for as long as possible.

Here are 15 tips to help you transform your separate melodies into a song that will have listeners hooked.

It sounds painfully obvious, but a lot of artists get stuck staring at a computer screen and looking at how the arrangement looks, rather than just listening to how it sounds. The more you listen to your song, you’ll know what there needs to be more and less of. Listen to other music, too, and see how their musical arrangements can influence your track.

Play around with your sounds, and make multiple that might appeal to different markets. Move your track around, heighten different parts, lessen others, and you could end up with something completely different and better than you first thought.

A great technique is to create a strong intro leading into the first verse and first chorus, with a few vocal backings and some instrumentation, says Robert Wimmer, audio producer at Writemyx and OriginWritings.

Then keep an element, such as a hi-hat, running through to the second verse. It’s a brilliant technique!

Some songs sound too busy, as though there is far too much going on, and it doesn’t make for a pleasant listening experience. Try and mute various parts of the song to see if it works better, or take different elements out that interfere with each other. It’s about how it sounds, not how much you can cram into a track!

5. Pile on the layers

The key to achieving a professional sound is to layer up! Not only does it add depth to different parts, but also sonic variation. Try compressing different sounds together in the same pattern to add an extra je-ne-sais-quoi to your song.

Try using non-linear composition technology to arrange your track. It is a straightforward way to build sections of music on a timeline, and you can then instruct it to play the sections in a particular order. It is a useful and simple way to mix up the arrangement, giving you a different perspective on your track. There are also some brilliant randomisers out there that will randomly order notes and clips in ways that you hadn’t previously thought of!

7. Fade out the fade out

Fading out the end of a track has always been a go-to for producers, but it is becoming increasingly out of fashion. Some tracks have a fade in during the intro, using sound effects from nature such as running water, or rain, rather than a fade out in the outro. Try just stopping the song at a natural endpoint, and it is likely to be more memorable!

Don’t be frightened of stripping instrumentals out at certain points, and leaving just the vocals behind with some added effects. A strong vocal can do the work of hundreds of instruments!

The way you arrange the music depends on who you’ll be playing it for.  Techno and house will likely have longer, stretched out arrangements, allowing DJs to mix different tracks into each other; pop or indie will be shorter, making them more friendly for radio users and listeners. Be sure to bear this in mind and arrange your track accordingly!

If your track has a fantastic, catchy hook, try putting it at the start of the song, says Brittany Tilson, audio blogger at 1Day2write. Some of the most successful, well-known songs of all time have an instantly recognisable hook at the beginning of the track!

Do you listen to a lot of music on the radio? Being different and completely off the wall is sometimes amazing.  Some of the best musicians of all time have redefined genres in this way but be careful. You want to strike a balance between being different and selling some copies.

Not enough can be said for the benefits of a fresh pair of ears. Listening to the same thing, again and again, can leave you feeling bogged down and unsure of where to go next. By incorporating a new perspective, you will be able to take the tracks in entirely new directions.

You can do this in two ways: the more modern way of duplicating parts and playing them with a slight delay; or the more traditional way of having two instruments play the same part simultaneously. This can create a beautiful effect and add more depth than you realise!

Why not keep your listeners on their toes? Keep the surprises coming by mixing up the instrumentation and chords, playing around with vocal effects, or adding a new riff into a verse. Subtle changes within a song will keep people excited about where the track is going.

It’s always possible to obsess over making a song completely perfect before releasing. Of course, some genres (such as electronic music) depend on rhythmic perfection, but for a more raw, visceral music experience, sometimes leaving a little imperfection behind can take a song above and beyond, and make it feel even more human.

Ultimately, music arrangement is the point where firm decisions need to be made, but it doesn’t need to be a daunting experience. You’ll be surprised with how many different sounding tracks you can create using just a few sounds, and how you can develop these to convey what you want through your music. Playing around with your track can take it to places you didn’t believe possible, and hopefully, some of these tips will help!

Joel Syder is an audio expert and writer at AcademicBrits. His main passions are enabling people to reach their potential in the developing field of human resources, and writing articles about things in life that inspire him. If you would like to contribute a guest post to Audio Issues, please read the guest post guidelines right here.