Are You Making These Top 10 Mixing Mistakes? 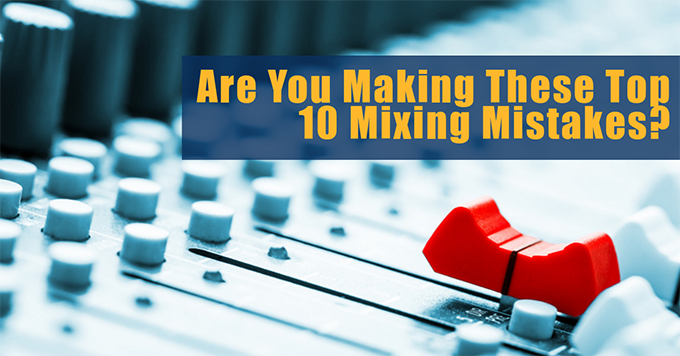 When people ask me questions about mixing, they’re often worried about whether they’re doing something wrong.

They’ll ask whether they “should” be doing this, or if that is the “correct” thing to do.

I completely understand the reasoning for these questions, because if you’re not experienced and confident with mixing you’ll second-guess yourself.

At that point, it’s better to get validation from engineers that are more experienced than you. You want them to tell you that you’re on the right path.

Most of the time, you’ll know immediately whether you’re doing something wrong only because it won’t sound right.

However, this leaves out the possibility that if you’re a beginner, your ears are less experienced. If so, you might not hear whether it sounds good or not.

Because mixing is arguably the most fun part of the whole audio process and where most people like to practice, it’s also where a lot of home studio musicians make mistakes.

Whenever somebody asks me whether they “should” do something, I tend to answer that they should do whatever they want to try to make the song better. Experiment a little bit. Go nuts with your plug-ins and try to break your song. Playing around with your plug-ins is one of the best ways to get to know exactly how they work.

That said, there are certain things you should avoid, especially if you’re going to release the mix to the world. You can experiment all you want and make your mix sound like shit in the process, but if you’re planning to show it to the public, you better make it sound good.

So in the following article, I’ll go over some of the most common mistakes you should avoid when mixing.

1. Not Editing and Comping Your Tracks

The mixing process becomes so much easier when you’re working with great sounding tracks.

Although one part of that is getting those sounds right at the source, another part is making sure those you edit those tracks correctly. That means editing both for groove and unnecessary noise. Noisy tracks cause problems when you add compression, and bad timing means lack of feel and listening enjoyment.

That means editing both for groove and unnecessary noise. Noisy tracks cause problems when you add compression, and bad timing means lack of feel and listening enjoyment.

Also, if you’ve recorded multiple takes, make sure you take the time to comp together the best possible take out of them all. If the vocal emotion of verse one is better in Take #1 and the feel of the chorus is tighter in Take #3, comp those takes together to push the song to a new level.

In the Editing video of my Quick Mixing package, I show you exactly how I go about editing and comping together tracks to make them sound great.

But you should still mix with mastering in mind. That means leaving enough headroom on the master fader and setting up your tracks so that they have the correct gain staging.

While there’s less worry about headroom on individual tracks with today’s technology, you still need to make sure your mastering engineer ends up with something that isn’t squashed or peaking before he even starts mastering.

You should also pay attention to the dynamics in your mix. I always use the Dynameter from Meterplugs to make sure I keep my mixes dynamic and big.

3. Not Listening To Your Compressor

Compression, along with EQ, is arguably your most important mixing tool. If you don’t listen to your compressor and just aimlessly twiddle knobs until you think something sounds good you’re in for a long learning curve.

Knowing how all the knobs interact and how to troubleshoot weird sounding compression settings is what makes you a master at compression.

If you’d like to know what all the buttons on your compressor do, check out my Complete Guide to Using Compression Correctly in Your Mixes.

But the thing is, he goes through the preset banks, finds something that’s close to what he’s looking for, tweaks to done and moves on.

While presets are a great starting point, they’re a terrible alternative to knowing what you’re doing.

Putting on the “Snare Snap” preset sounds cool and all but that preset has no idea what it’s listening to. It’s just too generic to be helpful without you knowing how to tweak it.

The way you make it your own is to manipulate the sounds to make the presets fit the song you are working on.

Being different with your sounds is what makes your music stand out.

5. Drums Blowing Through the Roof

Think of the drums in the mix as one of those actors in movies you don’t know the name of but every time you see him or her you know it’s going to be good.

That’s how you should treat your drums. As supporting actors that don’t interfere with the leading role but when it’s their time to shine they knock it out of the park.

For more on treating drums to make them stand out while staying out of the way of the arrangement, check out my Powerful Guide to Mixing Killer Drums in Only 6 Steps. Alternatively, check out the in-depth eBook and video series, Drum Mix Toolkit.

6. Not Using Groups and Busses

Creating a simple mixing process is a must if you don’t want to do the same things over and over again. Using groups and busses is the #1 to simplify your mix and making you both faster and better at your job.

Using groups and busses is the #1 to simplify your mix and make you both faster and better at your job.

Use routing when you have a whole group of instruments that fit together, like synths or strings. If there are many guitar parts to a song, try to route them all to one bus, so you only need to move one fader.

The trick is to balance all the individual channels before you route them to a separate bus.

Make sure they sound great as a whole before you route them because it’s counter-productive to try to make things easier if you haven’t balanced the tracks together.

This is the most common mistake I see even the most experienced engineers doing. While every rule is made to be broken, you still have to know the correct way to break it.

Using the same parameters for a reverb on an insert that you would use as a send? That’s a terrible idea.

Many engineers don’t realize that by using sends on tracks, you are still left with the original track.

Now you have the original on the same track, but you also have a copy playing in your aux track. What you do to the copy doesn’t affect the original at all!

You just end up with a louder signal.

If you want to send the original somewhere else, to an aux bus, for example, you have to route the outputs of the original to an auxiliary bus.

Don’t send a signal to a bus if you want to change it completely.

You will only change the copy.

You’ll only have more of the same, and any processing you do to the sent track will not affect the original.

Send the output of the track to the bus instead.

In short, route your tracks if you want to change a group of instruments, but use sends if you just want to add parallel processing alongside the original.

8. Not Filtering When You EQ

Don’t be afraid to cut the unnecessary crap from your tracks. Don’t just lightly cut your low-end when your instrument doesn’t need it.

The same goes for high-end filtering.

Filtering and EQ is a skill to practice. Too much filtering and you’ll end up with tinny-sounding and lifeless instruments.

If you’re looking for more EQ tips, I spend a lot of time talking about EQ and filtering inside my EQ Strategies – The Ultimate Guide to EQ.

9. Using Too Much Reverb

You’re probably reading this and thinking to yourself, “Yep. Guilty as charged.”

Also one of the most common mistakes you make with your mixes. And it’s understandable because all that lush reverb just sounds so good!

But when you add it to everything you’re just left with an ocean of instruments, all drowning in reverb.

Take the necessary time to tweak your reverbs until they sound just right. And please do me a favor and EQ them as well. It’s one of the easiest ways to clean up a muddy mix.

10. Not Checking in Mono

I recommend mixing in mono for a while just to make sure all your instrument are still there.

Mono is the best way to double-check stereo issues.

In mono, nothing will escape your ears. And if something vanishes, then something is wrong.

Just imagine if your awesome stereo delay for your guitar solo would all of a sudden vanish! No cool solo sound for you!

When you sum to mono, panning or stereo problems jump out at you immediately.

If you listen in mono and suddenly the backing vocals sound weaker, or the guitar solo almost disappears, chances are you need to ease off the stereo processing.

If you add too much stereo delay on a guitar solo, it might disappear when you sum everything to mono. The combination of the different delays creates phase problems that result in a small or non-existent guitar solo.

The same goes for any instrument. If something disappears when you’re listening in mono, it’s time to take a step back and ease off the stereo effects.

I hope the following guide gives you some ideas on what to avoid in your upcoming mixes.

If you’re interested in a fast and efficient workflow that teaches you to create better mixes in less time (without making any mistakes), then check out Quick Mixing.

Quick Mixing includes the Productivity Playbook – Better Mixes in Less Time and a brand new video on using a mixing template to speed up your workflow. This video will show you how I save an hour on every mix by having an in-depth template in place with all my plug-ins set up and ready to go. 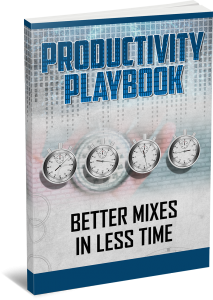 Here’s what you will learn from the Productivity Playbook and the Mix Template Video:

Head on over here and grab your copy. 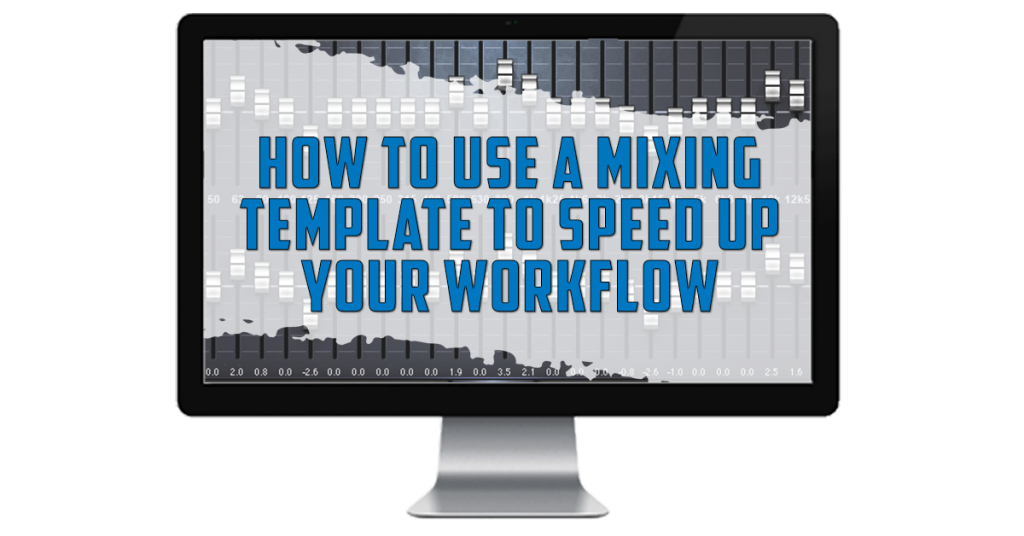