There’s No One Way to Learn Anything

Chances are, you’ve either learned my entire mix process through Step By Step Mixing, or you’ve seen me write about it ad nauseam. That’s Latin for “I can’t believe he’s going to bring this $#!t up again.”

You’ve already heard enough about it for now.

However, just because I have a method that I like teaching doesn’t mean that I think that’s the only method that works.

It’s not the only way. There’s no one way to do anything. Maybe brain surgery?

Anyhoo, yesterday I talked about my buddy Jordan and his Mixing Webinar you should absolutely take, especially if you work in harder genres such as rock and metal.

Jordan approaches mixing a little bit differently and that’s great. You’ll learn a new perspective to add to your bag of tricks.

I believe that to learn something you should learn as many ways to be as creative as possible from as many people as possible. Then you can pick and choose to make up your own process. My methods of doing anything, whether that’s audio, online business, writing or even cooking, is based on the synthesis of many different mentors throughout my life that have influenced my creativity.

Here’s what you’ll learn on his webinar:

Although his webinar is pure useful content, he also has a premium course called Hardcore Mixing. If you decide to join after the webinar I wanted to give you a free bonus for doing so through my link. 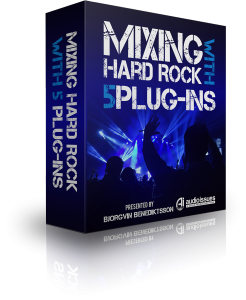 The Mixing Hard Rock With 5 Plug-ins Masterclass takes the Step By Step Mixing methods and uses them on a hard rock track to teach you to create kick-ass rock mixes.

If you’d like to get the Mixing Hard Rock With 5 Plug-ins Masterclass for free, all you gotta do is join Jordan’s Mixing webinar here, join his premium Mixing Hardcore course he offers at the end and then send me your receipt in an email. From there I’ll send you exclusive access to the Masterclass.

But don’t delay, I’m only offering this Masterclass with Jordan’s webinar this week so make sure you grab it today, or on Friday at the very latest.

Here’s where you go to get started.